The Langley summit tops out at 14,026 feet with a total mileage of 18.5 miles out and back. For those who are ready to tackle a fourteener for the first time, Mount Langley is made for you.

Bryan Feller • August 22, 2017 • 0 • 1.4k
Share 1
Bryan Feller 2017-08-22
I did the 80-mile High Sierra Trail hike with the kids earlier this month. Getting back was a hard adjustment — my body was at sea level but my head was still in the Sierras. About a week into my “normal life,” I started looking for short hikes I could do without much red tape. I feel like such an addict! I had to get another Sierra high in before the summer ended. So after working a few weekends in a row on a big project, I decided I’d reward myself with a short adventure. That short adventure was Mount Langley.

The Langley summit tops out at 14,026 feet with a total mileage of 18.5 miles out and back. At an elevation gain of only 4,652 feet, this was well within my fitness level to tackle as an overnight trip.

As the weather was good, I hit the road at 6 am on a Wednesday. I had reserved a permit, but somehow mistakenly made it for the next week. Luckily, I was able to get a walk-on permit at the Eastern Sierra Interagency Visitor Center in Lone Pine. I made it to the Cottonwood Lakes trailhead by 2 pm.

The trail starts at close to 10,000 feet, and with the added weight of a pack, it was clear from the start I was a bit off my game. Fortunately, the minimal elevation gain to Cottonwood Lakes, coupled with the perfect 70-degree weather and exquisite scenery, kept my mind off any discomfort. The first breathtaking moment came shortly thereafter when Mount Langley emerged across a meadow. 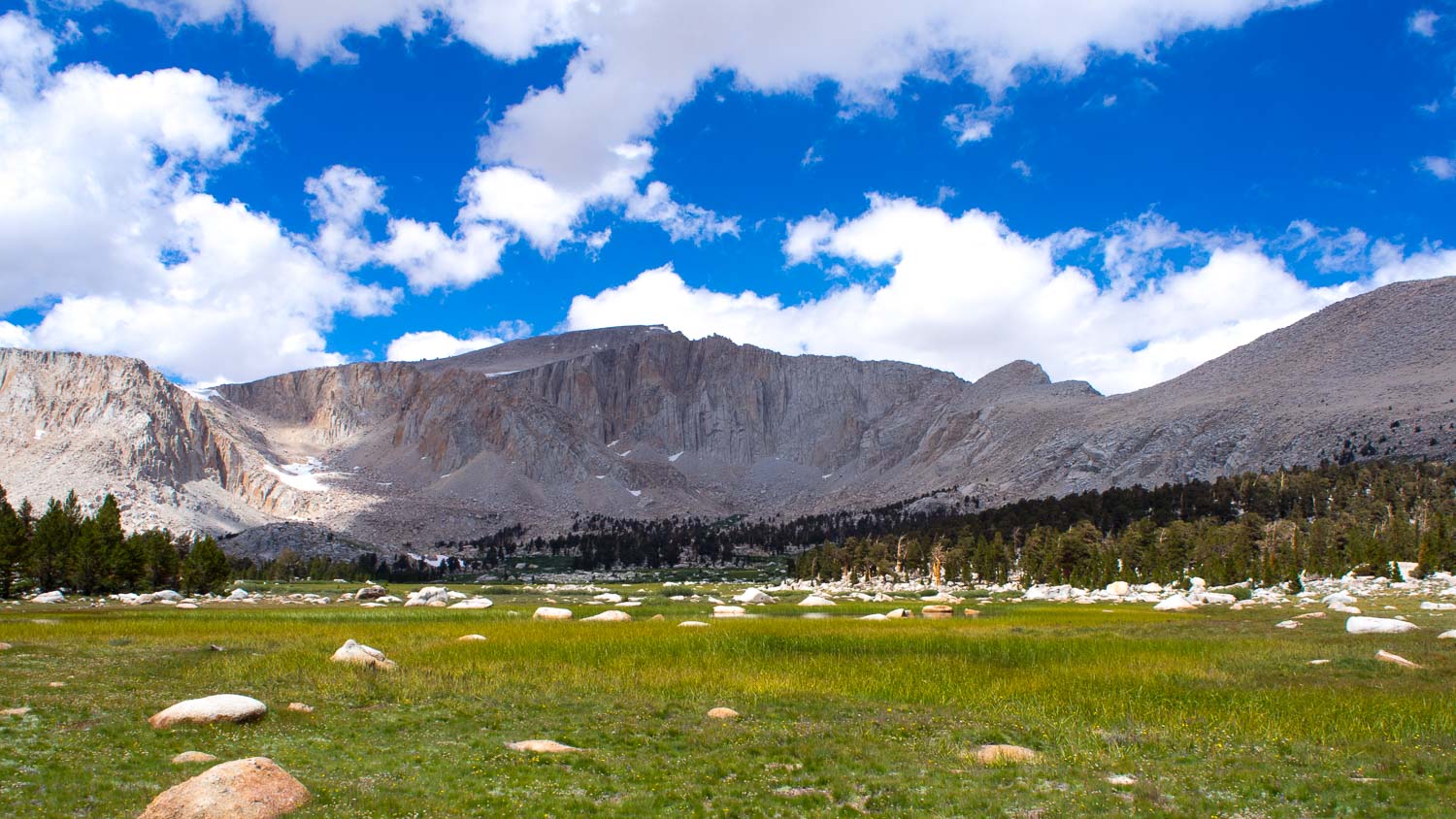 My reaction to the altitude was obvious when I made camp that afternoon. Standing for too long made me lightheaded, and I would have to sit again before blacking out. I pushed through it and was settled in by early afternoon.

I was completely alone in the middle of the wilderness — just as it should be. I camped at Lake 4 in Cottonwood Lakes, looking across Lake 3 at Mount Langley. It was time for a nap, and I felt much better when I got up at about 6 pm, ready for my favorite dinner — Mountain House sweet and sour pork.

While I slept great during the nap, sleep did not come easily when I tried again three hours later. This was not unexpected. I never sleep well when I go straight up to high altitude. 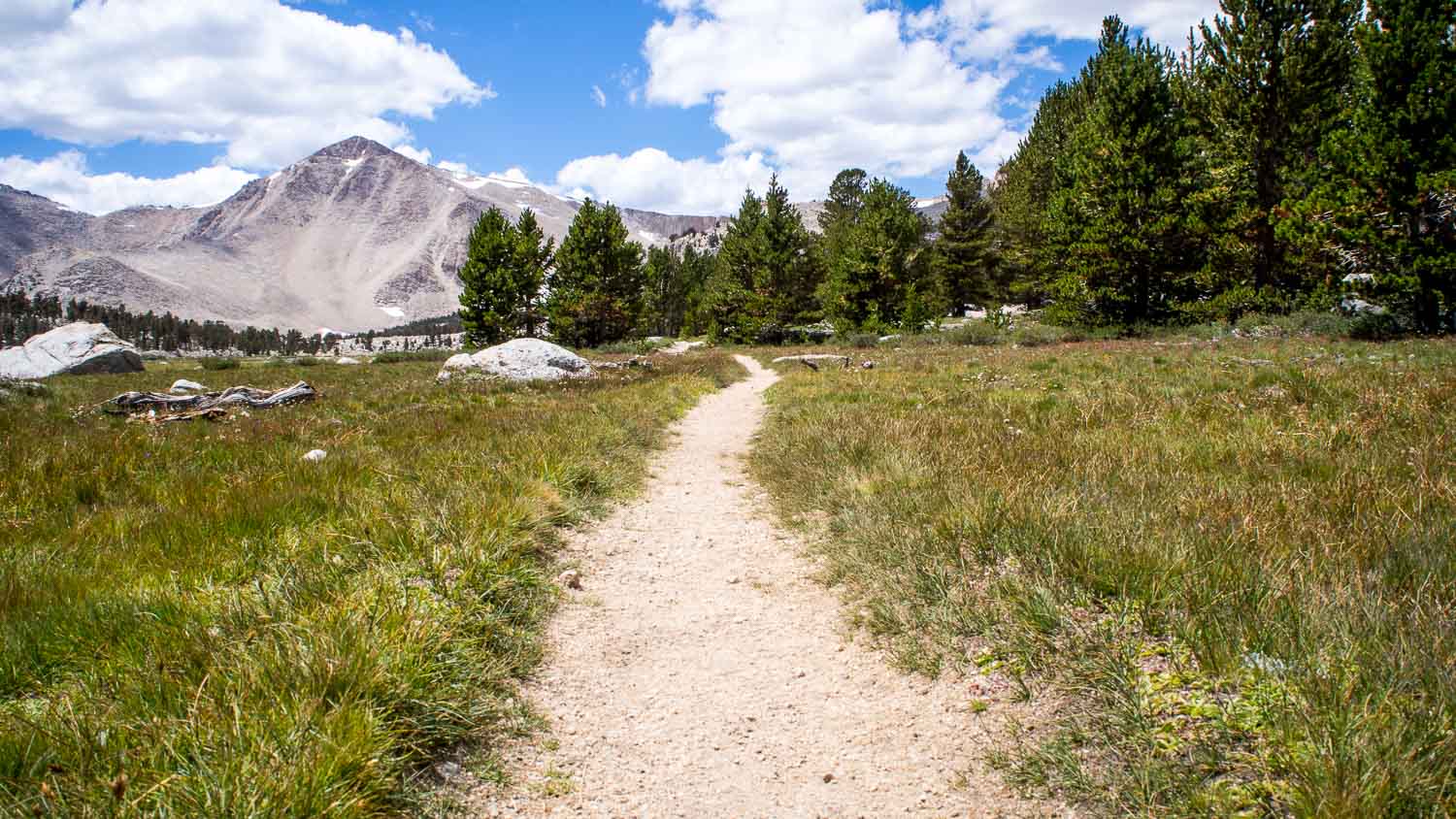 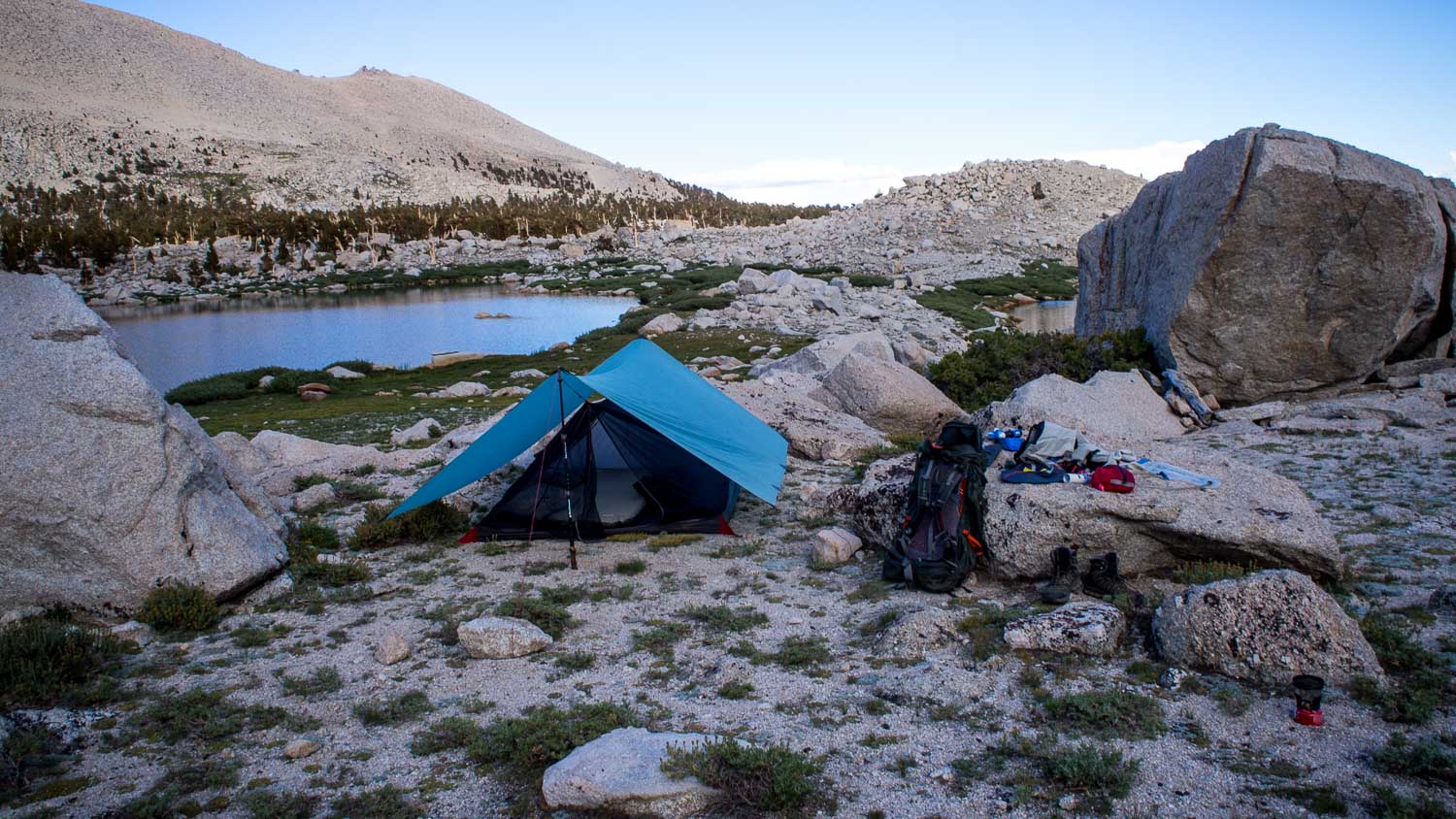 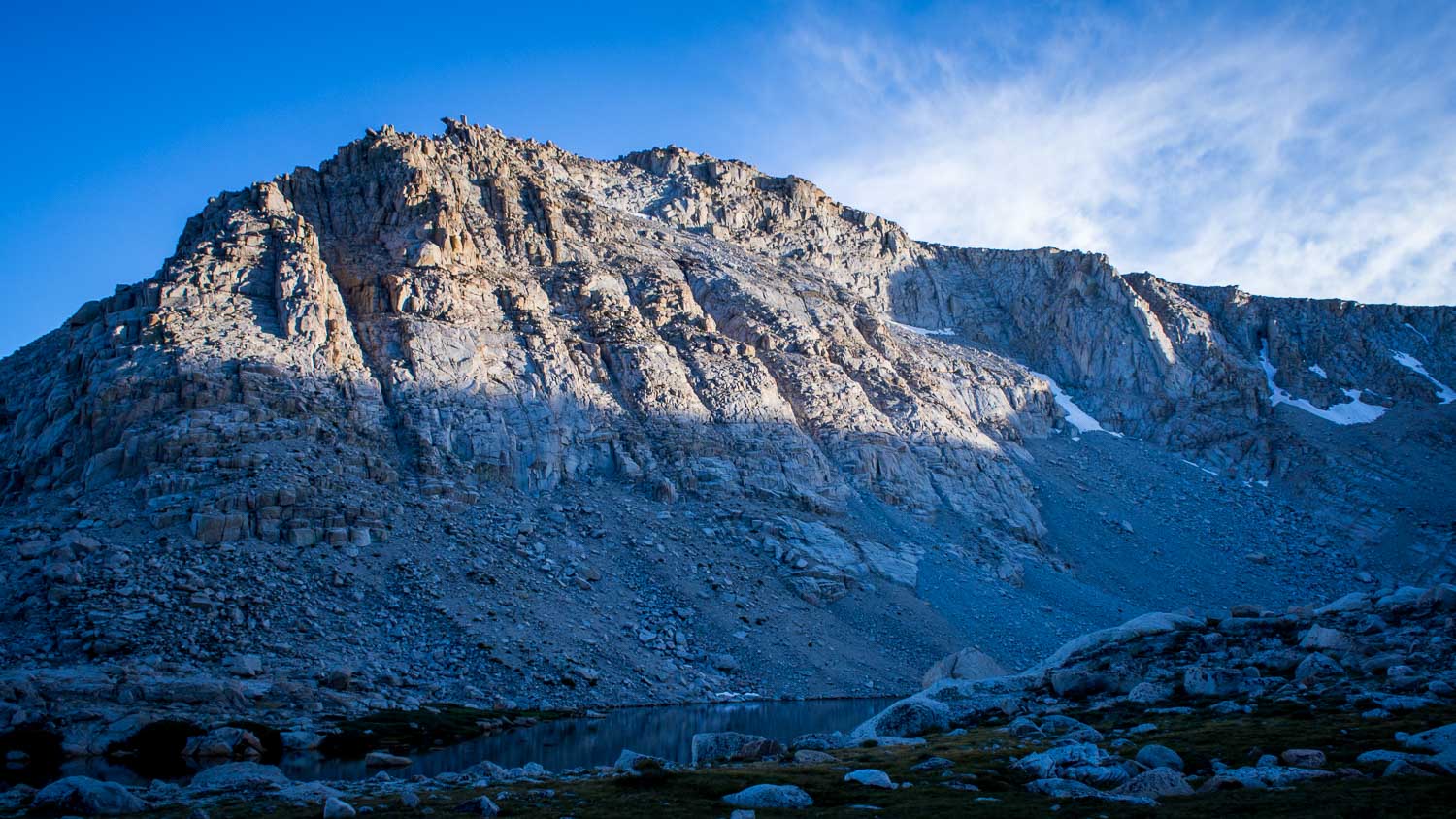 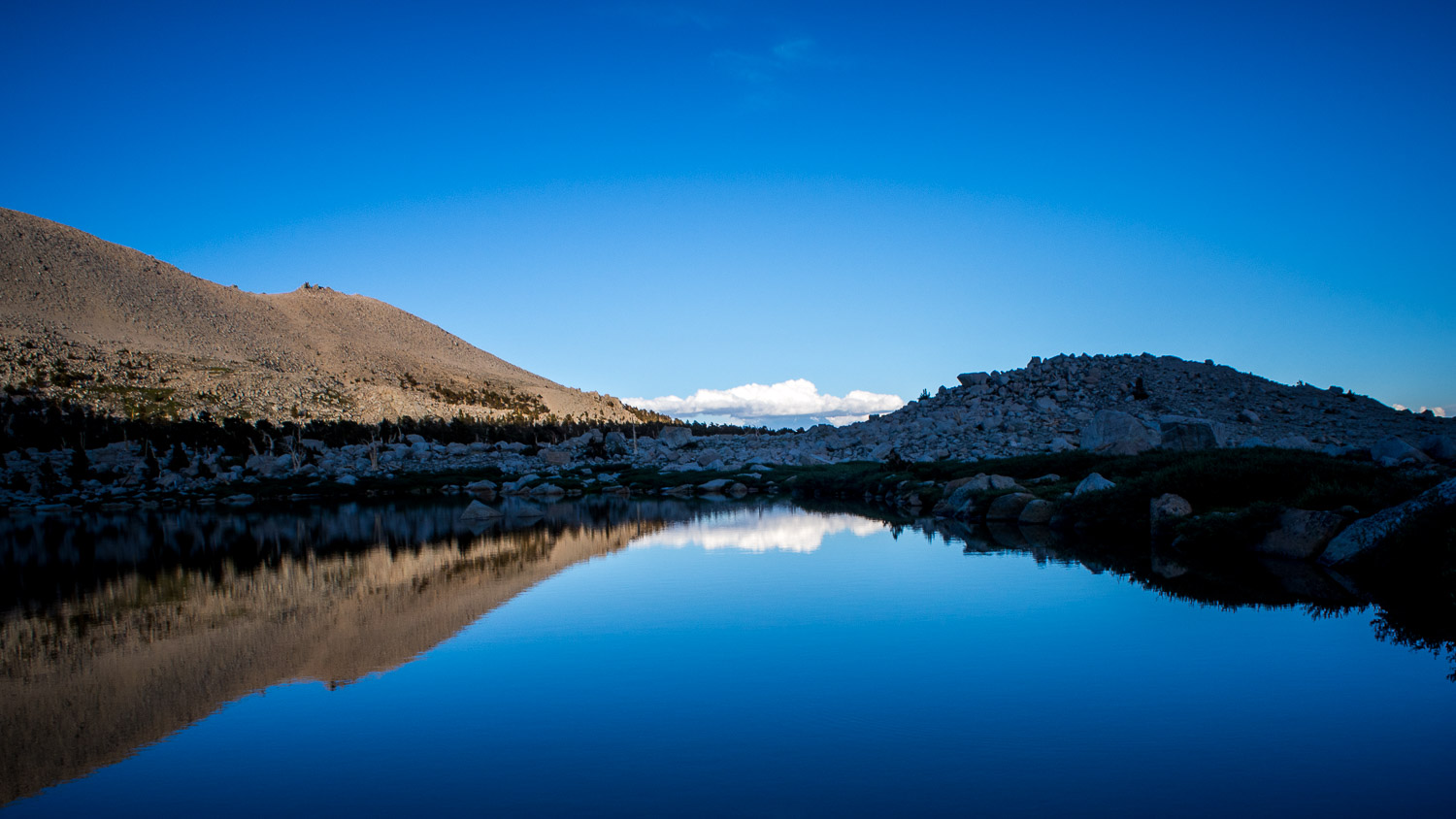 Nature called in the middle of the night, and the ambient light of the Milky Way was so bright I almost didn’t need a headlamp. I stood in awe for a few minutes before my fear of mountain lions forced me back to my tent. I’m not positive there were mountain lions, but it’s a little creepy at night when there’s no one around for miles. Not that a nylon tent wall would protect me from a cougar, but I felt safer nonetheless.

I was up around 4 am the next morning and started out with the light of my headlamp guiding the way. I elected for Old Army Pass, which had some snow, but it was traversable with a little scrambling.

I was up around 4 am the next morning and started out with the light of my headlamp guiding the way. I elected for Old Army Pass, which had some snow, but it was traversable with a little scrambling. From the vantage point at my campsite, Old Army Pass seemed insurmountable. Luckily, that was not the case; it’s not a bad trail at all. At the top of the pass, I could make out my tiny campsite nestled between Lakes 3 and 4. 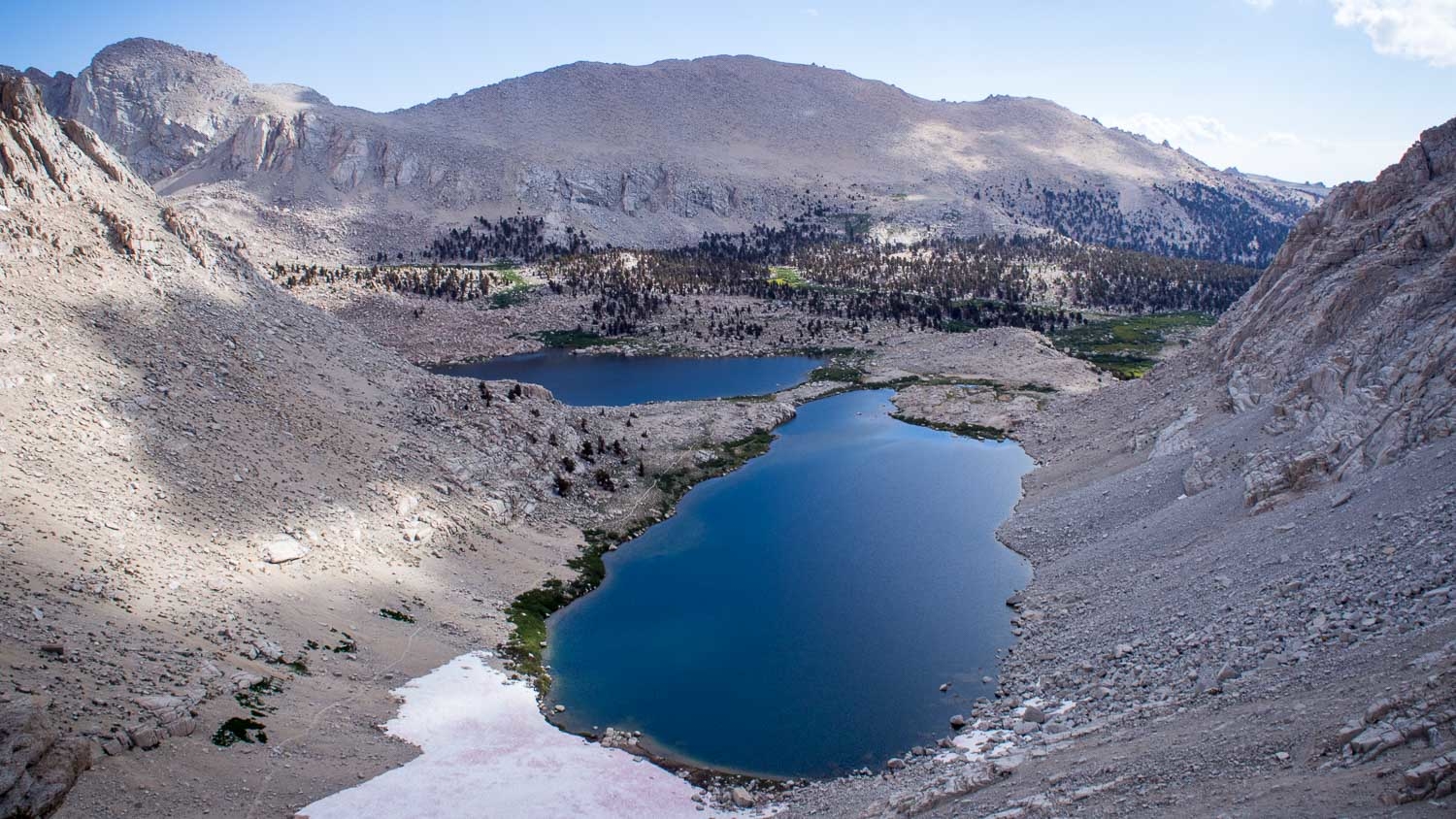 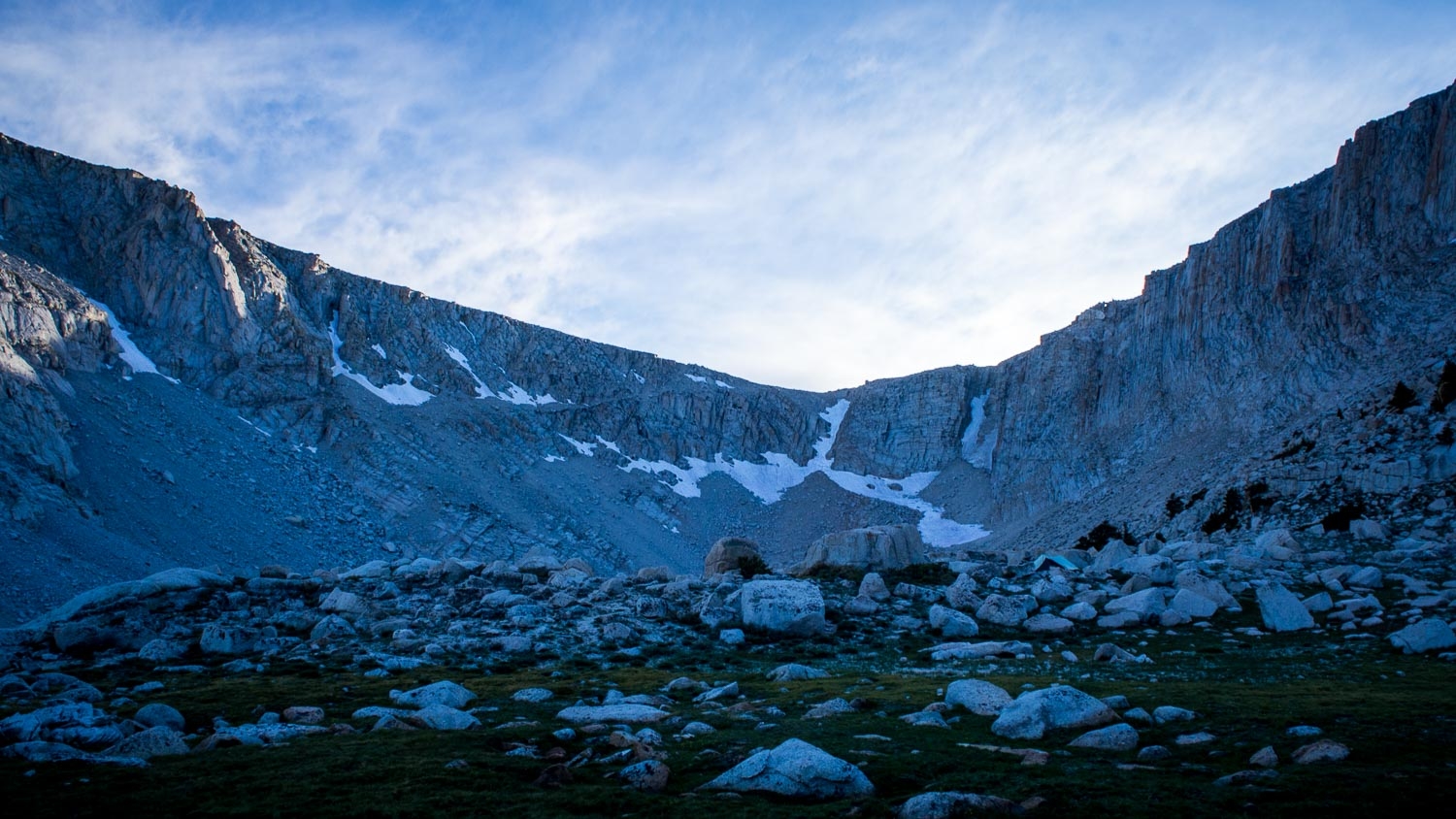 It took less than three hours to reach the summit. Hiking along high ridges makes for spectacular views the whole way. As I approached the summit, I could see all the way across the Kern River Valley to the Kaweah Range in the distance, which was the backcountry I had experienced with my kids on the High Sierra Trail just a few weeks ago. 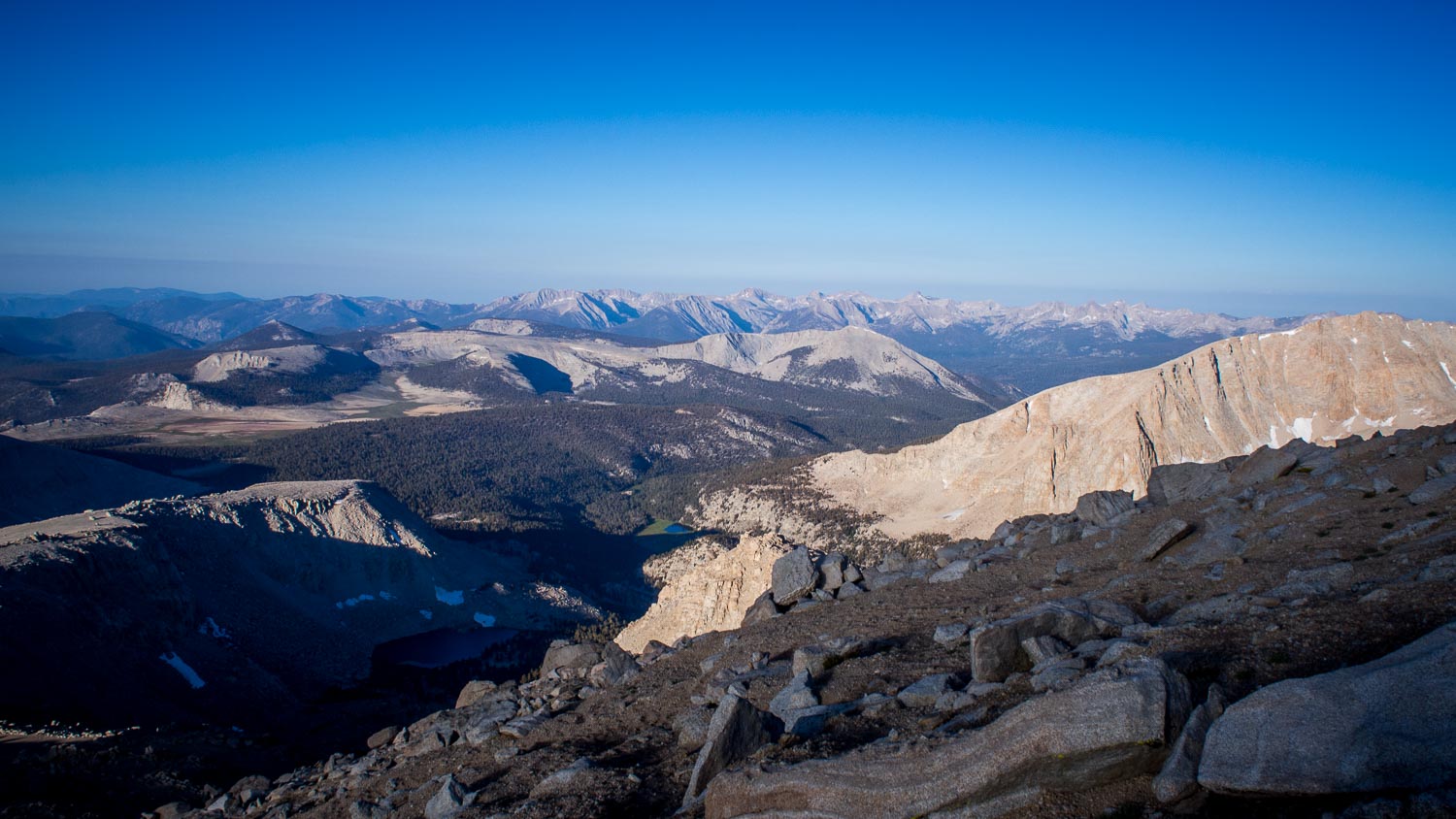 Along the way I ran into another hiker, Sam. At about 13,000 feet, he seemed to be suffering a bit from altitude sickness, so we took a few breaks together. As we passed 13,500 feet, the clear weather gave way to ominous dark clouds. While we didn’t hear any thunder, my intuition told me it wasn’t a good idea to be on the summit. I considered turning back, but decided to give it thirty minutes. Sam and I would either be running down the mountain ahead of the lightning or the clouds would break and we’d summit. Sam agreed.

As we passed 13,500 feet, the clear weather gave way to ominous dark clouds. While we didn’t hear any thunder, my intuition told me it wasn’t a good idea to be on the summit.

Getting Struck by Lightning is Easier Than You Think

Getting struck by lightning is always a real danger when hiking at high altitude in the Sierras during the summer. Thunderstorms frequently gather around the mountain peaks in the afternoons. On August 23, the day after my hike, a hiker near Tahoe was struck by lightning at 9,000 feet. He was badly burned, but miraculously, he lived to tell about it. Friends nearby were able to call for a helicopter rescue. According to the news report, the man’s clothes were literally blown off his body by the impact of the strike. Click here to read the full story.

Like clockwork, the dark clouds broke apart thirty minutes later, and we continued to the summit. I took some pictures of the storm blowing off across the valley. There was this eerie gray fog that clung to the mountains, lending a beautiful but foreboding atmosphere to the scene. 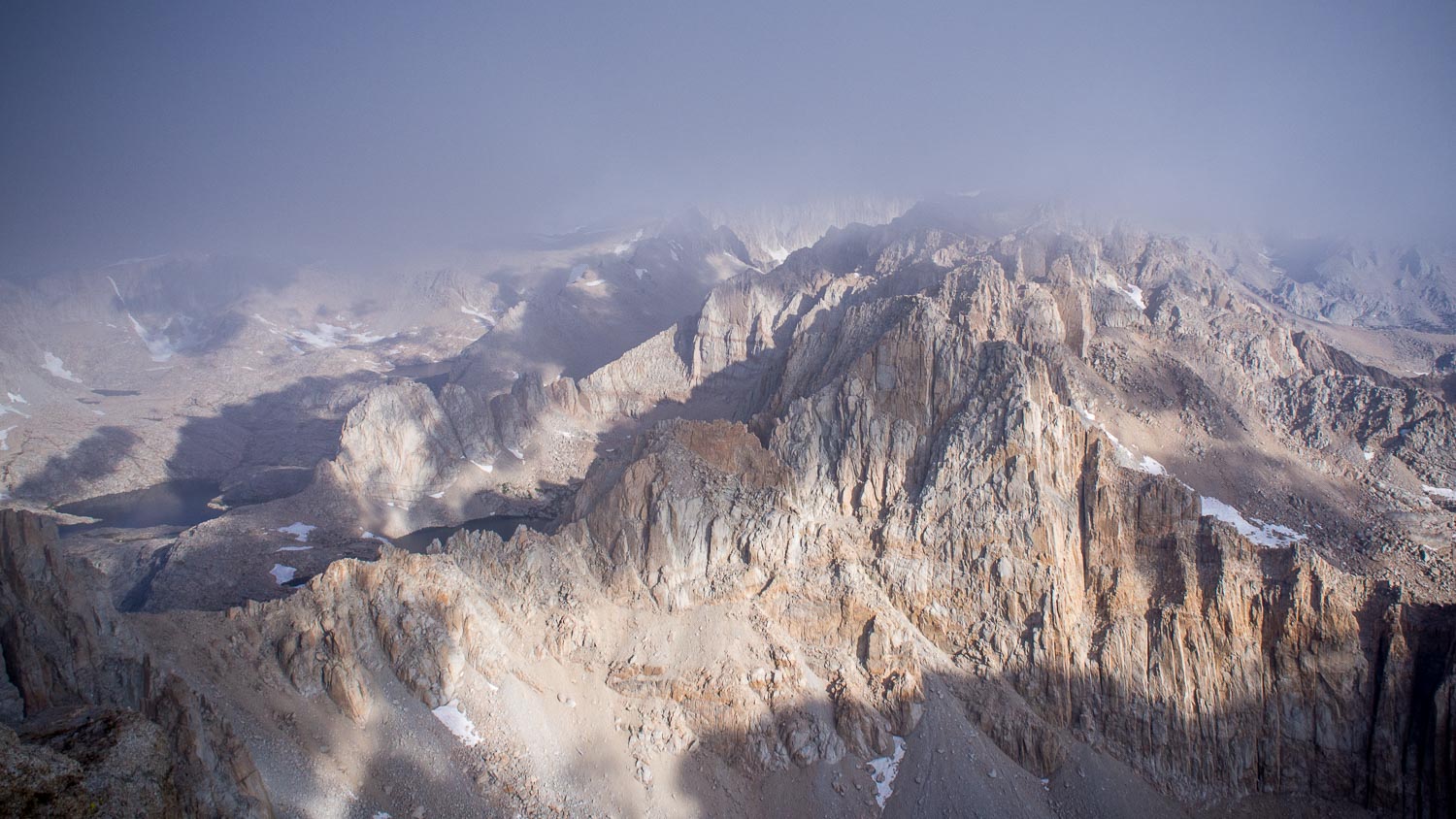 We stayed at the summit for fifteen minutes, Sam and I taking pictures of one another. I walked along the edge of the summit, admiring the 2,000+ foot exposure and enjoying the pucker factor of looking over the edge. I stood mouth open at the views in every direction – stunning. 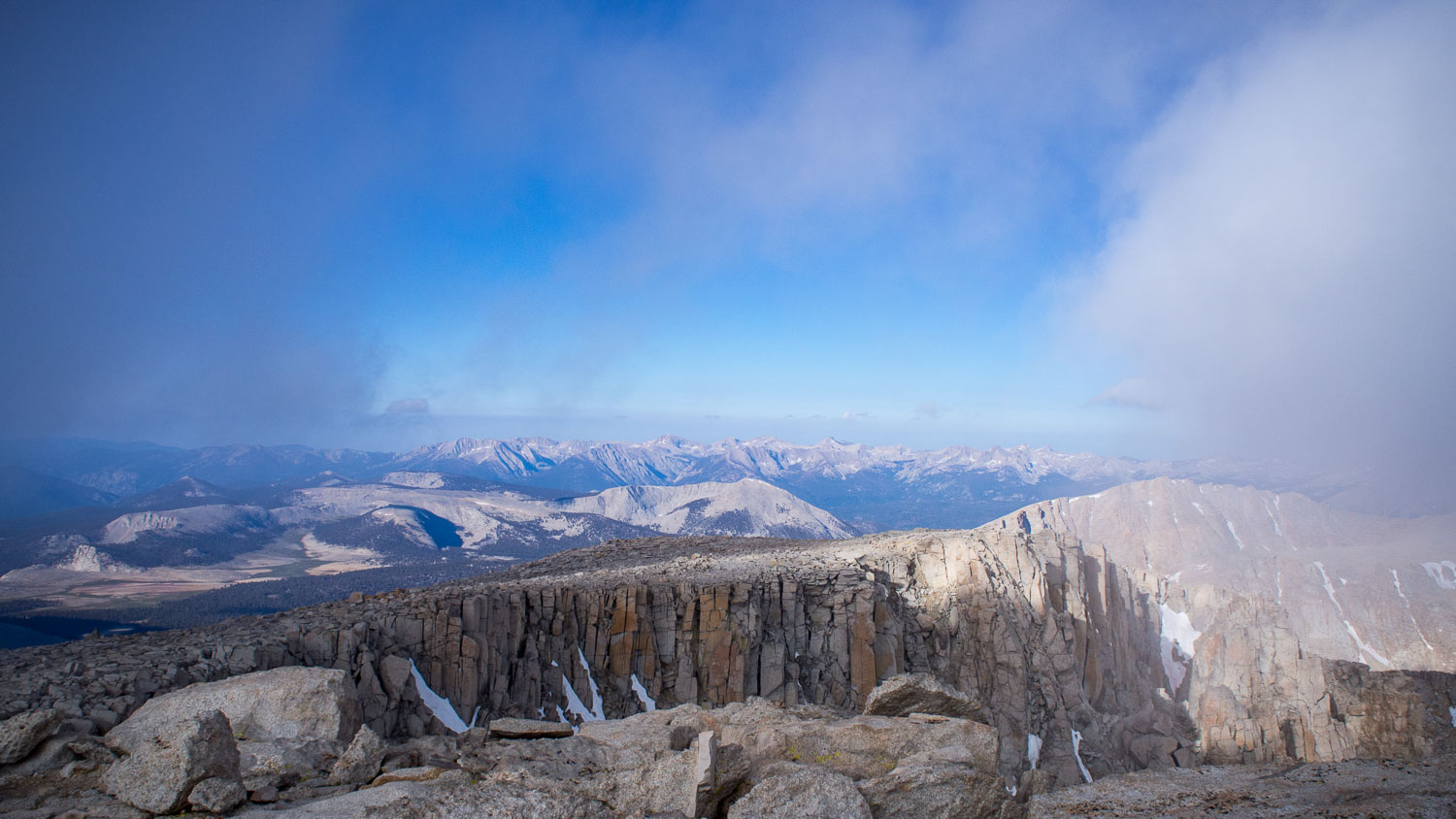 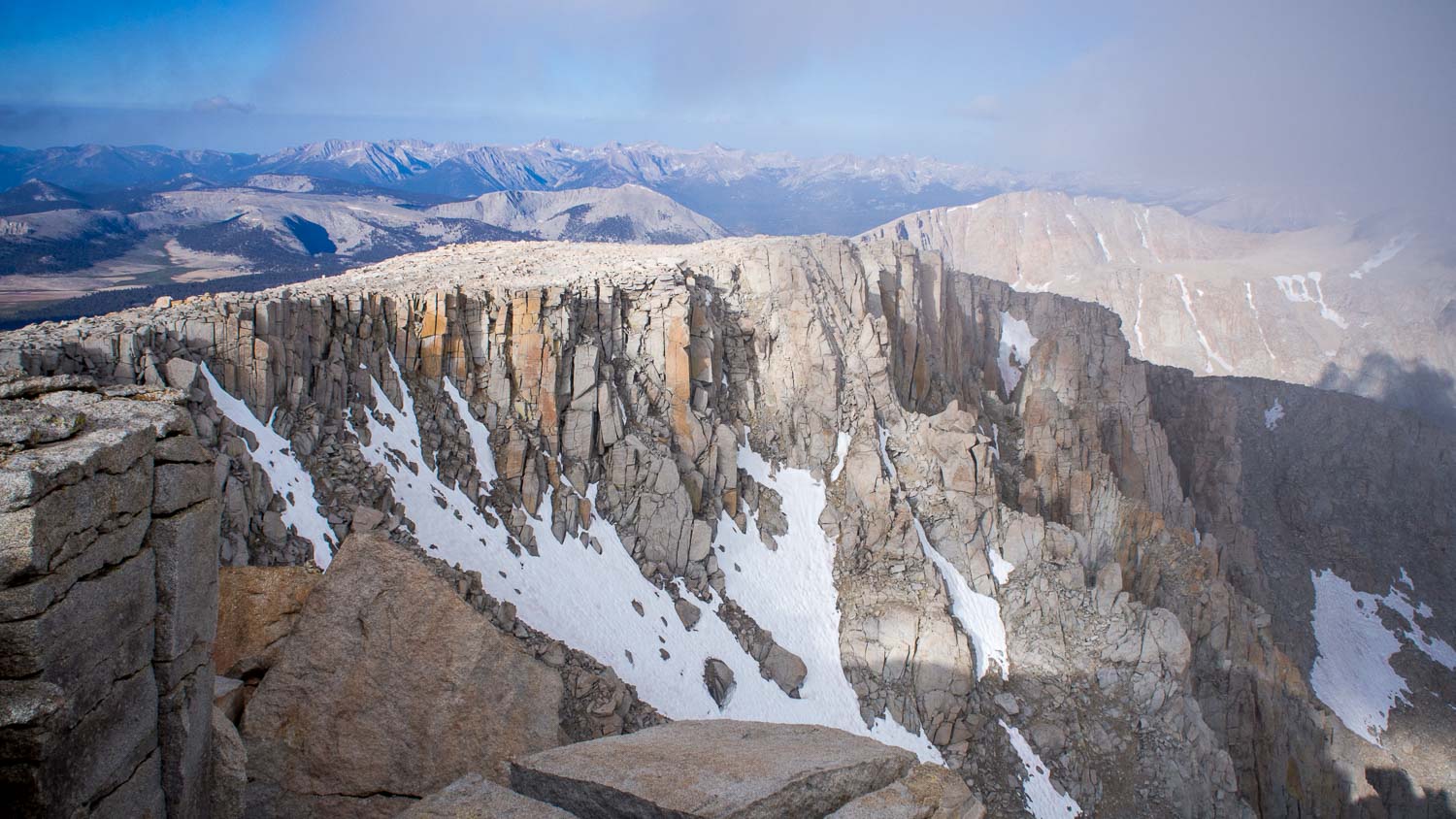 The weather never fully cleared and I didn’t want to be caught under the next thunderstorm, so we headed down. I got to camp at 11 am, had a quick lunch, then packed up and was back down the trail. Along the way I saw marmots everywhere. As I walked into camp I caught one of those little bastards red-handed. He was on top of my bear sack trying to chew his way through the Kevlar. If he had a few more hours, I think he might have chewed his way through. I applaud his persistence.

As I walked into camp I caught one of those little bastards red-handed. He was on top of my bear sack trying to chew his way through the Kevlar.

Why go on this hike?

Whitney is so crowded and it takes a long time to get up there. By comparison, in three hours from my camp I was standing on a 14,000-foot peak, looking across the Eastern Sierras. For those of you who are ready to tackle a fourteener for the first time, Mount Langley is made for you. It’s easy to get to, pretty simple to get a walk-on permit during the week, and it’s absolutely stunning.