Bryan Feller • September 19, 2020 • 144
Share 0
After my recent trip to Mineral King and Nine Lakes Basin, I was still a little shell shocked from being caught in a huge lightning storm. When the weather got better and the smoke cleared from the recent fires, I was anxious to get into the Sierras again – hoping for a better experience this time. I chose Baxter Pass as my point of entry since I had never done it before. I’m glad I did.

The recent fires had left me wheezing. I rarely get asthma flareups, but I had one when I started out. I was a little concerned that I would not be able to make it over the 6,000+ of elevation from the trailhead to Baxter Pass. And for the first two hours of the hike I found myself feeling more fatigue than I was used to. Eventually, I settled into a nice rhythm and started feeling pretty good.

I reached Baxter Pass by 1pm. It was like being on the surface of Mars, with its vast, desolate red landscape. It was quite beautiful. The vastness of it all gave me that strangely comforting feeling of being insignificant. I lingered at the summit a little longer than I typically do, just to take in the stark beauty before heading down toward Baxter Lake.

The vastness of it all gave me that strangely comforting feeling of being insignificant.

It only took 30 minutes to reach Baxter Lake. It was much bigger than I expected, considering it was the end of the season. I grabbed some water and a snack and kept moving. I had dreams of making it all the way to Sixty Lakes Basin so I only stayed a few minutes before getting back underway.

There was no visible trail between Baxter Lake and Dollar Lake, only faint traces here and there. This made travel a lot slower. I found myself finding high points where I could plan my route to the next high point – avoiding thick brush, bogs, and rock formations. It took more energy out of me than I was planning for. Given my 6,000+ ascent from the trailhead that day, I decided to make camp when I got to Dollar Lake rather than push farther down the trail.

I had a lot of time on my hands, so I spent the afternoon exploring my immediate area and reading. Dollar Lake meets the John Muir Trail, so I saw a few hikers strolling by, but these would be the only people I would see on the trip. I take a lot of solo trips, and this was the first time I actually felt lonely on the trail. I had to call myself back to the present and say out loud, “Bryan, you are in one of the most beautiful places on Earth. Look around! And be thankful you get to be here.”

I had to call myself back to the present and say out loud, “Bryan, you are in one of the most beautiful places on Earth. Look around! And be thankful you get to be here.”

The self talk helped, but not 100%. I hate to admit it, but the COVID pandemic is starting to really drag me down. I do plenty of Zoom meetings for my work, but this is a poor substitute for real human connection. I am really looking forward to doing more trips with my adventure friends in the future – more than words can say.

I got started at first light the next morning. Early mornings are always my favorite time of day in the Sierras. As expected, I got to see the alpine glow on all of the granite peaks until the sun came up. This never gets old, no matter how many times I see it.

Rae Lakes are some of the jewels of the Sierras. I made a note to myself that I need to climb Painted Lady the next time I enter the Rae Lakes Basin through Glen Pass. I’ve passed her too many times without summiting.

Just after I passed Rae Lakes, I took the trail climbing up about 500 feet of elevation into Sixty Lakes Basin. I didn’t know what to expect since I had never visited this area before. It was quite stunning. Seeing this place completely lifted my spirit. It felt like the beauty of this new place washed off all that cruddy residue of loneliness I had felt the day before.

It felt like the beauty of this new place washed off all that cruddy residue of loneliness I had felt the day before.

The basin is a long narrow plateau with Mount Cotter and Mount Clarence the King to the west. I thought about climbing Mount Cotter, but I knew it would cost me an extra night out and I wanted to keep this trip short and sweet. Many of the lakes were small, and some had dried up, since it was late in the season. Even so, there were still a lot of lakes in a very small area. What a hidden gem.

Something caught my eye as I looked up toward a small ridge. It was a bighorn sheep! He looked like he was posing for a hero shot when I saw him. Then I realized that he was keeping watch over his ten comrades who were eating the vegetation directly below him. My cell phone didn’t have the zoom capability to do him justice.

The trail stops about halfway into the basin, so I started cross-country toward an exit point that descends down to Arrowhead Lake. Once again, I had to move from high point to high point to find a route around the lakes, cliffs, brush, and bogs. At one point, I got myself  blocked by a cliff and had to backtrack.

The exit from Sixty Lakes Basin was pretty straightforward. There is notch at the end of the basin that leads to a steep drainage. As I descended into the drainage, I hugged a rock band on my right. I almost took the obvious descent. It looked like the correct route, but it would have dropped me off below the John Muir Trail and I would have had to fight my way across thick brush to get back on trail.

Bec and I hiked to Kearsarge Lake last weekend and a random hiker told me he had just taken this route and gave me specific instructions. I’m glad I followed his advice.

I got back on the John Muir Trail at Arrowhead Lake and arrived at camp a few minutes later. I packed up and headed up toward Baxter Lake, hoping to get off trail before sundown. It was going to be a long day.

After reaching Baxter Pass, the descent was a slog – losing 6,000+ feet over 7 miles, marking the end of a 20+ mile day. Surprisingly, I felt pretty good at the end. I had spent so much time hiking long distances over the summer that I had finally coaxed my body into handling endurance pretty well.

Surprisingly, I felt pretty good at the end. I had spent so much time hiking long distances over the summer that I had finally coaxed my body into handling endurance pretty well.

Consistency is everything. This really encouraged me to stop putting so much emphasis on strength training and start putting more time into building long endurance for bigger adventures next year. Most importantly, I am not going to do these adventures alone! 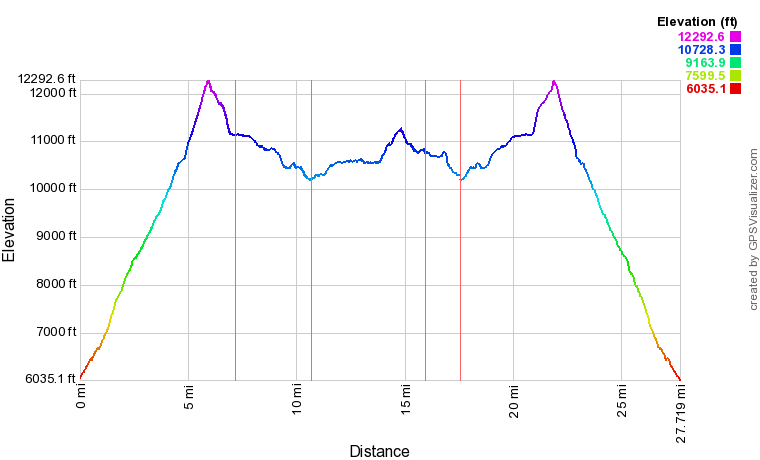