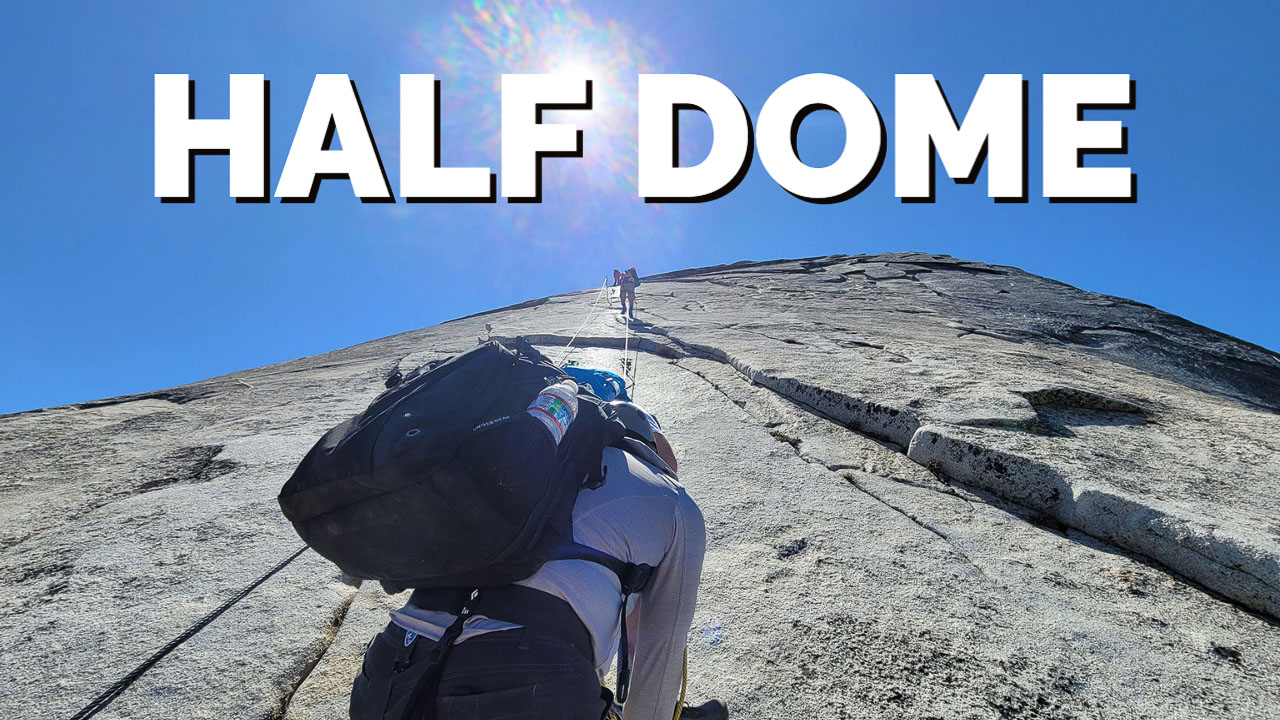 Half Dome: Leading a Day Hike with Summit Adventure

Tom Smith from Summit Adventure asked me if I wanted to help him lead a Half Dome day hike with a handful of guys at the beginning of 2020. It’s on the Sierra Peak Section list, so I said, “Yes. Of course.” at the time, but one of the guys got COVID, so we postponed it to May 1. I drove in the night before and Tom picked me up at 5:00 am at the Summit Adventure Lodge. It was nice to catch up together on the hour-long drive to Yosemite Valley where we met our crew: Alberto Kalach, Claudio, Diego, Miguel, Marco, and Marco (yes there were two Marcos). They were all lifelong friends in middle age who made a tradition of doing adventures together every year.

The hike up the Merced River to Nevada Falls was as beautiful. There was mist everywhere and beams of the sun were shining through the trees. creating a huge rainbow. We continued on to Vernal Falls, which was equally as stunning, then the hike leveled out for a while giving us all a break from the steep elevation gain. There was 5,000 elevation gain total, and about 18 miles round trip from car to car, but the majority of the elevation gain seemed to come at the end as we approached the done itself.

It took us quite a while to get to the Sub Dome, which is right before Half Dome itself. We didn’t get there until about 3:00 pm which was quite a bit later than we had planned. One of the gentlemen in our party had had a horrific ski accident a year earlier. It almost killed him when it happened and he was still recovering. He couldn’t move as fast and this slowed the group. At the Sub Dome, he decided to stay behind while the others pushed to the summit.

The cables we still down for the season, which meant there were no crowds of people. In my opinion, it’s also safer. With the cables down you need to wear a harness and use a Prusik with a Klemheist Knot to ascend. The possibility of a fall is almost zero. In contrast, when the cables are up, no one is tied in, so a slip can be fatal. About 200 feet from the summit, I was right behind one of our clients when the exposure and the fitness expenditure of the day had caught up to him. He was pretty scared; breathing heavily with shaky legs. He told me he wanted to go down, but we were all on a cable together, so this wasn’t an option I wanted to consider.

He was pretty scared; breathing heavily with shaky legs. He told me he wanted to go down, but we were all on a cable together…

I knew he could do it, so I pushed him just a little bit. I’m glad I did. In the car later that night he told me that was the greatest adventure of his life. It made me wonder how many times we back off things we are afraid of and never experience the joy of pushing through.

I just told him that wasn’t really an option. I guess it could have been, but I didn’t … I thought he could do it. And in the end, he did. He was slow. He was shaking. He was scared out of his mind those last 200 feet, but he finally made it up. We all got to the summit at about 5:00 pm. The weather was perfectly clear and the view of The Valley from the summit was stunningly beautiful.

Descending was long and slow. In fact, we descended as the sun went down and it was pitch black by the time we got off-trail. Tom and I actually got back to the Summit Lodge at 10:00 PM, and neither one of us had planned to be out there that long. No restaurants were open at that hour, so I resorted to cooking up a couple of Beyond Meat patties in the freezer before I went to bed. I don’t know if I didn’t cook them long enough, or if I was dehydrated. I really don’t know what happened, but about 30 minutes after I ate those patties, I started burping up this horrible Beyond Meat smell. I got sicker and sicker and sicker and I didn’t sleep most of the night.

I drove home the next day utterly exhausted and sick. When I was driving, In fact, I was so tired I had to drink a 5-hour Energy just to stay awake on the ride home. For the next three days, I couldn’t eat and had a fever on and off. I ended up losing four pounds from the ordeal. I used to eat Beyond Meat burgers occasionally while on road trips. After being sick and burping up that disgusting Beyond Meat after-taste smell, I don’t think I can ever eat a Beyond Meat burger again. I know I vomit if I do. Whatever those things are made out of they’re not food. They are a chemistry experiment. And as much as vegetarians and vegans might think they’re a good alternative to meat, I’m not sure.

When I think of this trip, the thing that stands out most was the friendships I was among our crew. These guys were in their forties and fifties and, every year, they went on a big adventure and they help each other stay in shape. In fact, there were planning their next adventure on the hike out. This is so countercultural. Most guys get to their forties and fifties and their friends are encouraging them to sit in front of the TV and watch other guys that are in shape play professional sports while they drink beer,

Most guys get to their forties and fifties and their friends are encouraging them to sit in front of the TV and watch other guys that are in shape play professional sports while they drink beer.

It was really encouraging to these guys model something healthy and to be a great example for their kids as well. We can all learn a great lesson from their friendship.