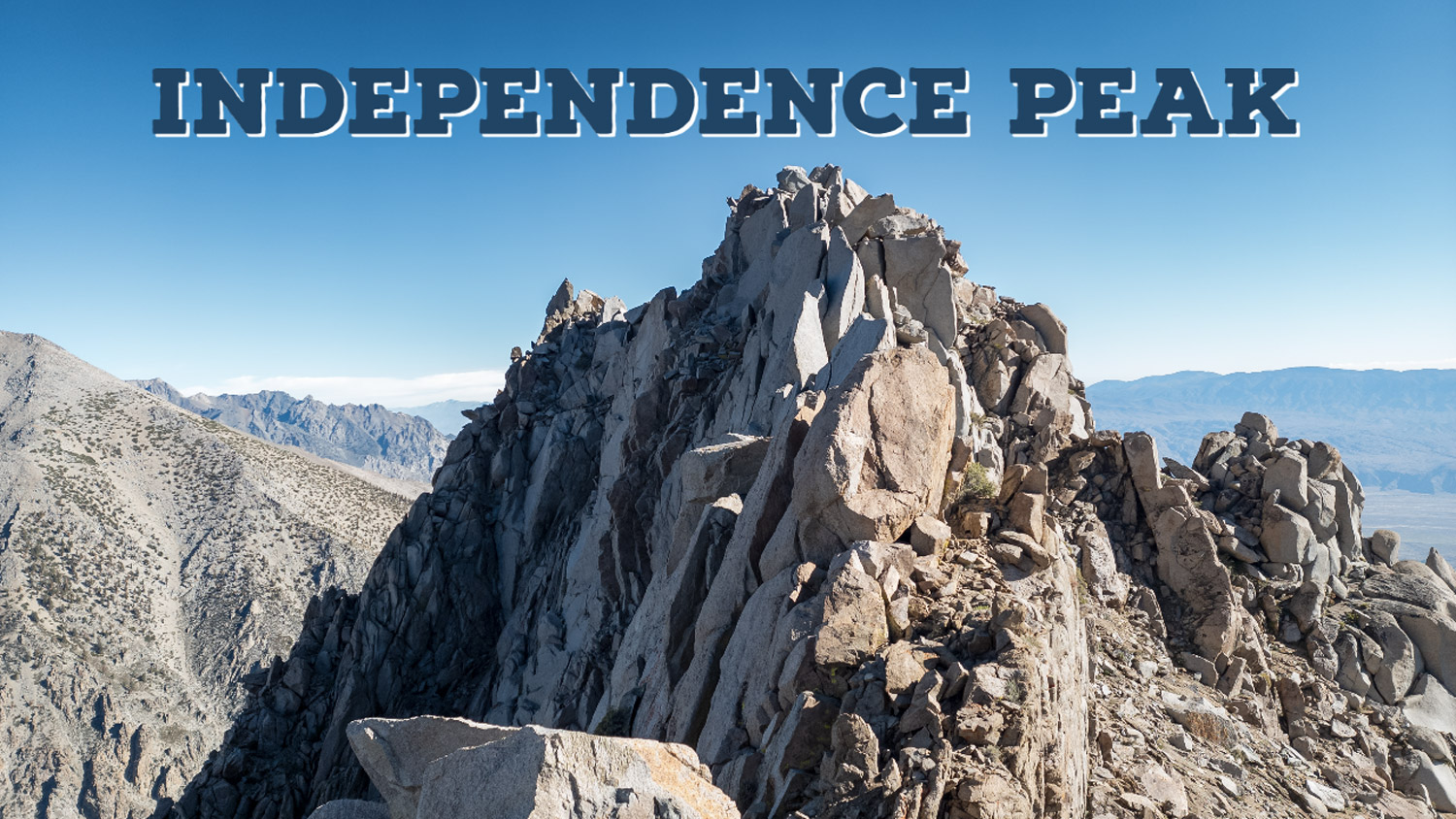 Independence Peak is the Perfect Intro to Sierra Scrambling

Independence Peak is the last day-hikable peak on the Sierra Peak Section I had left near Kearsarge Pass. I’ve always been a little afraid of it because it looked almost unclimbable with its steep, loose scree-laden slopes. Not because of technical challenges but because it simply looked miserable. I had envisioned slogging up a sand slope where every two steps forward came with a step backward in deep sand and scree. This is Sierra mountaineering at its worst.

The route is on the south side of the Onion Valley Campground. At 11,742 feet in elevation, it’s pretty short by Sierra standards, and it is one of the shortest routes I have climbed – less than four miles round trip.

Unprepared for the “Cold”

Ten days ago, Wes and I passed through Lone Pine in the afternoon on our way to Dragon Peak. It was 108 degrees! It was only 80 degrees today, and it felt like a completely different world. I grabbed dinner at The Grill and got to my campsite in Onion Valley by 6:00 pm. When I arrived, temps were in the high 60’s and dropping. For the first time in nearly five hot months, I felt that sense of euphoria that comes with the changing of seasons. My whole body seemed to relax. I read a book until it got too cold, then moved to my car to continue reading. My neighbors all had campfires. I, on the other hand, had plenty of firewood at home, but it never occurred to me to bring it with me. I was ready for a miserably hot night sleeping on top of my bag. Instead, temps were headed down to the low 40’s. Brrrrr.

There was a full moon that night. Luckily, I brought my eye mask, so sleeping cowboy-style under the stars didn’t keep me awake. I woke up a few times and put my glasses on each time to see a billion stars above me before drifting off to sleep again. I slept well in the cooler temps, and when morning came, I didn’t feel at all like getting up. By way of confession, I hate getting up in the dark.

I forced myself out of bed by unplugging the air valve on my mattress. Within 10 seconds, I was lying on the hard ground. I had crossed the Rubicon. Now I had to get up. I threw my gear in the car and started making coffee under the light of the moon. I kept my headlamp off as much as possible to avoid disturbing my neighbors.

I was so prepared for hot temperatures that I didn’t bring gloves. I ended up putting socks on my hands until I got out of the mountain’s shadow. My body had been acclimating to heat for months, and it shocked me when I realized how unprepared I was for mildly cold temperatures.

Moments of Being: Another Sierra Sunrise

Just before 6:00 am, the dim glow of first light began to emerge on the horizon at the mouth of the canyon that leads to the Owens Valley below. I’ve seen this many times before, and it never gets old. If I live to be 100, it will still never get old. Faint pinks turn to a compressed rainbow near the horizon. A thin band of reds and yellows fade into turquoise and blue that disappears into the black star-filled sky above. A single star is visible above the narrow band of color—a lone rebel that refuses to disappear. Black silhouettes of large pines near the far edge of the basin formed the bottom border of this scene.

I stand in a shallow Sierra basin surrounded by towering peaks. Soon, a pale rose color gently lights up the east-facing mountain slopes all around me. The rose color fades into a dim grey with a touch of green. Was that it? Then it happens. The first rays of light lick the mountains’ tops and light them on fire like candles. These oranges and reds are stronger than the rose color of first light. It’s as if God himself is bringing up the dimmer switch in this massive rock amphitheater. In the final crescendo of this scene, shadows give way to brilliant glowing orange cast across the faces in direct line of sight to the sun. The thing that always surprises me is how one slope can be lit brilliant orange while those next to it are not illuminated at all. The seeming randomness of this only adds to the awe of the experience.

I head up the trail, still fully present in this Sierra spectacle.

From Trail to Shoot to Crag

My hands are cold, even with my socks as makeshift gloves, and I find myself breathing heavily with only moderate exertion. The trail is not steep but going from 1,500 feet to 8,500 feet and camping always throws my body off. From experience, I know that in 30 to 45 minutes, I’ll probably be feeling great, so I continue on faith. A few miles in, I came to Robinson Lake. Wow. Seeing mountains during sunrise reflected in the glass still water is mesmerizing. I sat by the bank, ate trail mix for breakfast, and washed it down with some overly strong coffee from my thermos.

The trail ends at the lake. Fifty yards away lies a network of shoots that lead to the upper mountain. “Don’t overthink it,” I said to myself, and I started up the shoot that looked most promising. Almost immediately, I was scrambling with hands and feet – and loving it. I climbed up the shoot for 500 feet and found myself traversing the north slope moving upward to a crag system near the summit. The sun had come up, but I was on the shadow side of the mountain. I followed another shoot and gained the summit ridge. I step on top of a large fin, bathed in the warmth of full sunlight. I could finally take off those silly socks I was using for gloves. I had been taking them on and off between scrambling sections and was glad to be rid of them.

From the summit ridge, I could see the sheer cliffs below and the crag system that led to the summit. I was almost there – or so I thought. I scrambled over to the south side of the crag, then across the spine of the crest, then back to the north. I looked at what I thought was the summit, and it was nothing more than the continuation of a long spine. The summit was actually a quarter mile away.

On most days, false summits register a kind of disappointment and sometimes outright despair, but today I was loving the scramble. I didn’t want it to end. This place was a God-sized jungle gym, and I was a ten-year-old boy again. I slowly figured out this three-dimensional maze and made the summit at 10:30 am.

For the first time this season, I wasn’t worried about thunderstorms chasing me off the mountain. Instead, it was a beautiful cloudless day. I felt myself relax, knowing I had all the time I needed to carefully find my descent route – a long, scree-filled shoot that ended near Robinson Lake. This was not the shoot I had ascended; that one was so steep, it may have been perilous to descend it.

I surfed the scree for 20-minutes to reach the lake and was back at my car just before 11:00 am.

I thought I would hate this one, but I loved it. It was short and spicy, with lots of fun scrambling. It’s the perfect introduction to High Sierra scrambling. I think I might even take friends up Independence Peak in the future.

I’m Back on Kearsarge Peak, Like I Never Missed a Beat