Mount Baldy is a tough hike in the day. At night it gets quite a bit harder.

Bryan Feller • August 21, 2016 • 0 • 2k
Share 0
Bryan Feller 2016-08-21
A great idea popped into my head. “Let’s hike Mount Baldy at night under the light of the full moon! We probably don’t even need headlamps.” I texted the idea to the group. Texts came back. Ping. Ping. Ping. Wes and Liz signed up. Courtney was down for a stupid idea. Even Bec reluctantly agreed. It seemed like a pretty cool idea.

At 6pm we met at the trailhead as the sun was setting. We were a little short on gear, so I stuffed a huge camping sleeping bag into my pack and strapped on a huge camping pad that stuck out almost a foot on each side of my pack. It looked absolutely ridiculous. Thank God it was dark. I would have been the laughingstock of the hiking community if anyone had seen this.

At 7pm, last light was waning and we started up the trail. For some unexplainable reason, we moved pretty slowly up the mountain. And past the ski lifts at Mount Baldy Notch, some of the team started feeling the fatigue. The darkness seemed to cast a spell of lethargy on us. 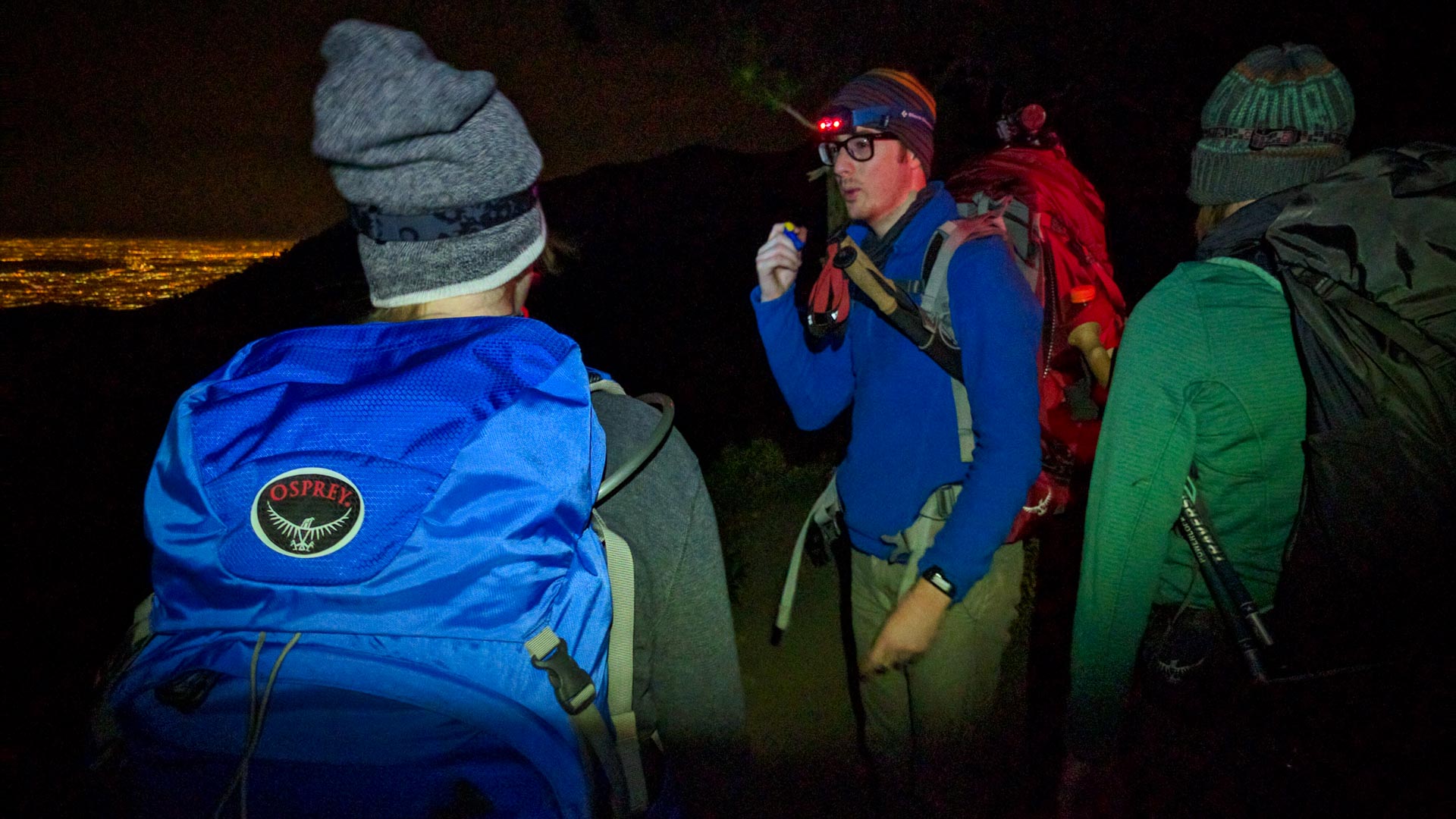 The “Backbone” part of the trail is a little sketchy in the daylight. At night, it’s downright freaky. That full moon that was supposed to light our path was on the other side of the mountain. There is a particular part of this backbone trail segment that has a wall on one side and high exposure on the other. “Exposure” is climbing lingo for a big cliff. This made the huge camping pad that was sticking out a foot on each side of my pack a real danger. If I bumped it against the wall, it would throw me off balance and off the cliff. Game over. Bec was shining a headlamp in my face from the other side of the crux trying to be helpful. All it did was blind me. It was a puckering experience. I took a deep breath of relief once I reached solid ground.

If I bumped it against the wall, it would throw me off balance and off the cliff. Game over. It was a puckering experience. I took a deep breath of relief once I reached solid ground.

We made our way up the final summit push and Bec almost didn’t make it. She was absolutely exhausted and psychologically drained by the darkness we were hiking in. If she could have turned around, she would have. But in the pitch black, getting to the summit seemed to be the only reasonable option.

At the summit, there was no release. No breathtaking views. We just threw down our pads and bags and slept cowboy style. Nobody had a chance to cool down. We just climbed in our bags exhausted and clammy. Then the wind picked up. Nobody slept. It seemed like the longest night ever. 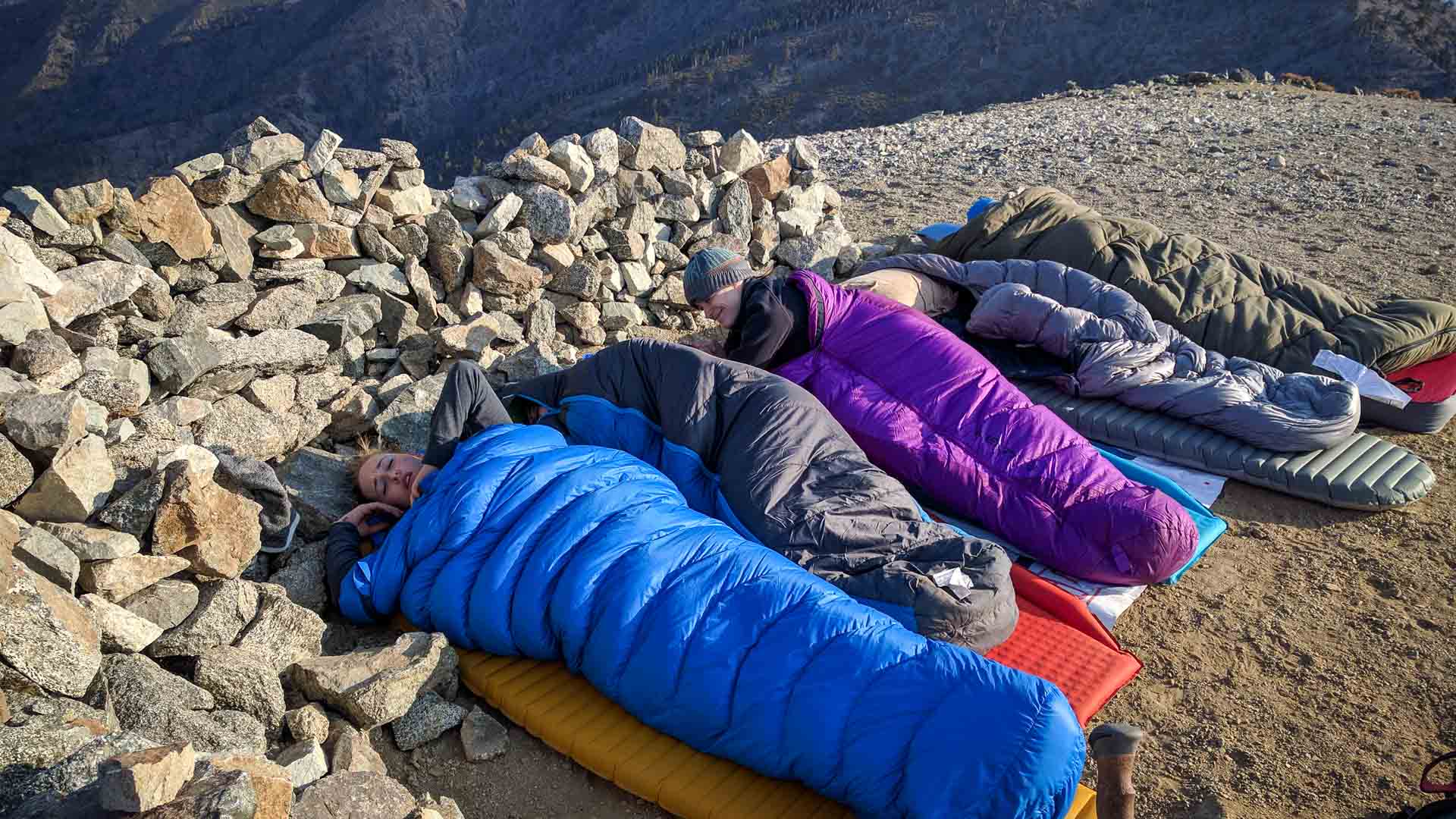 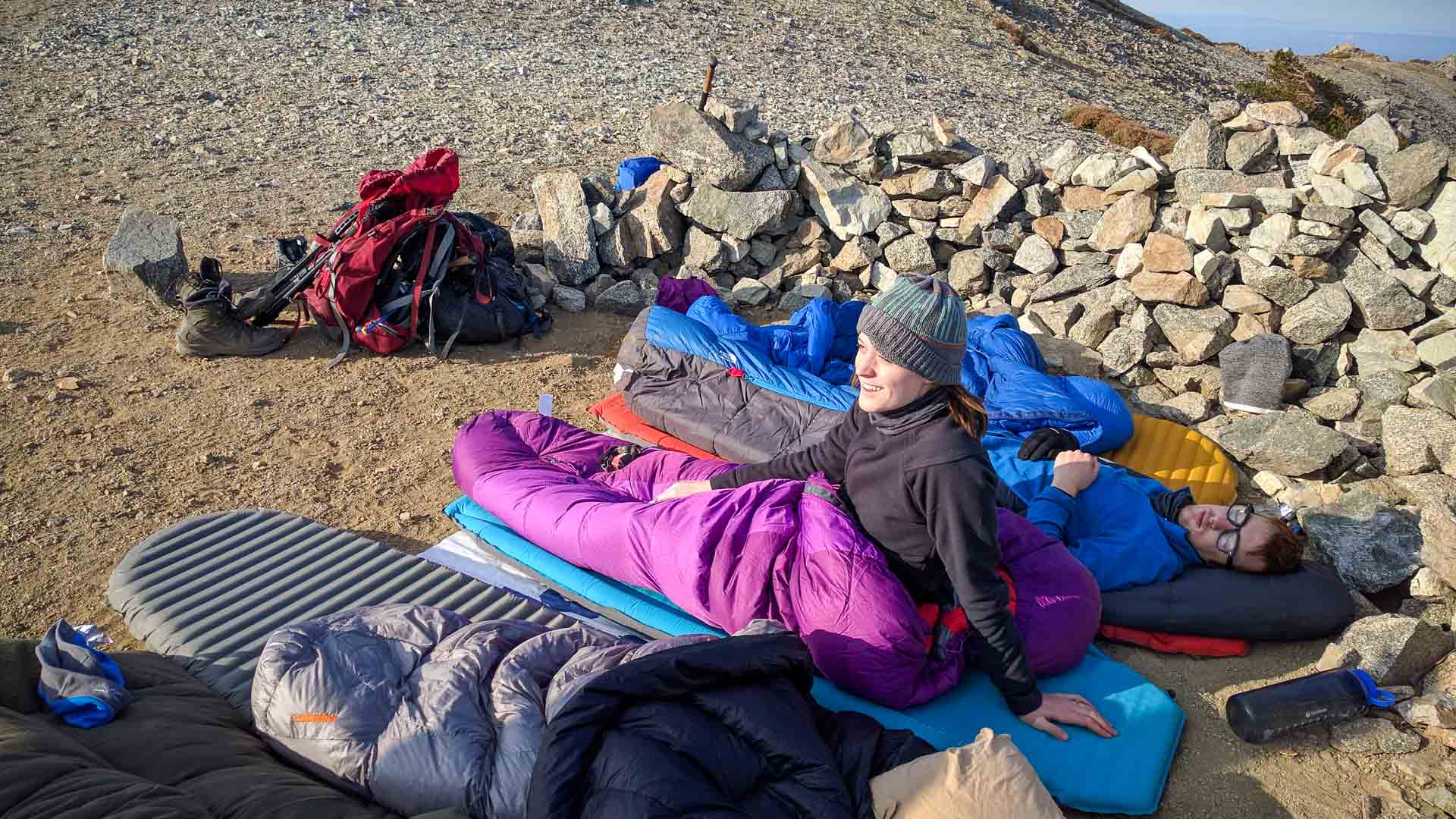 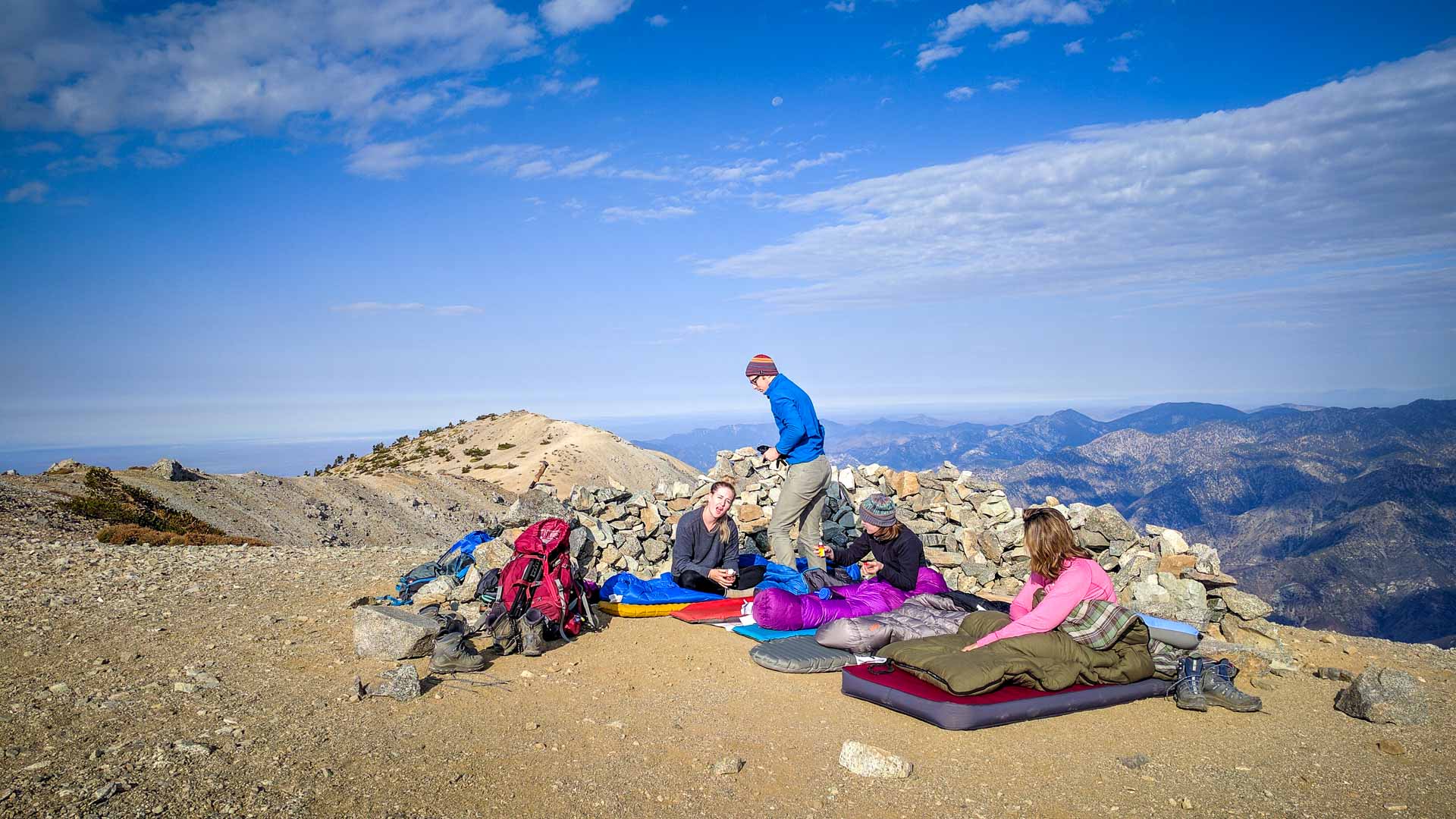 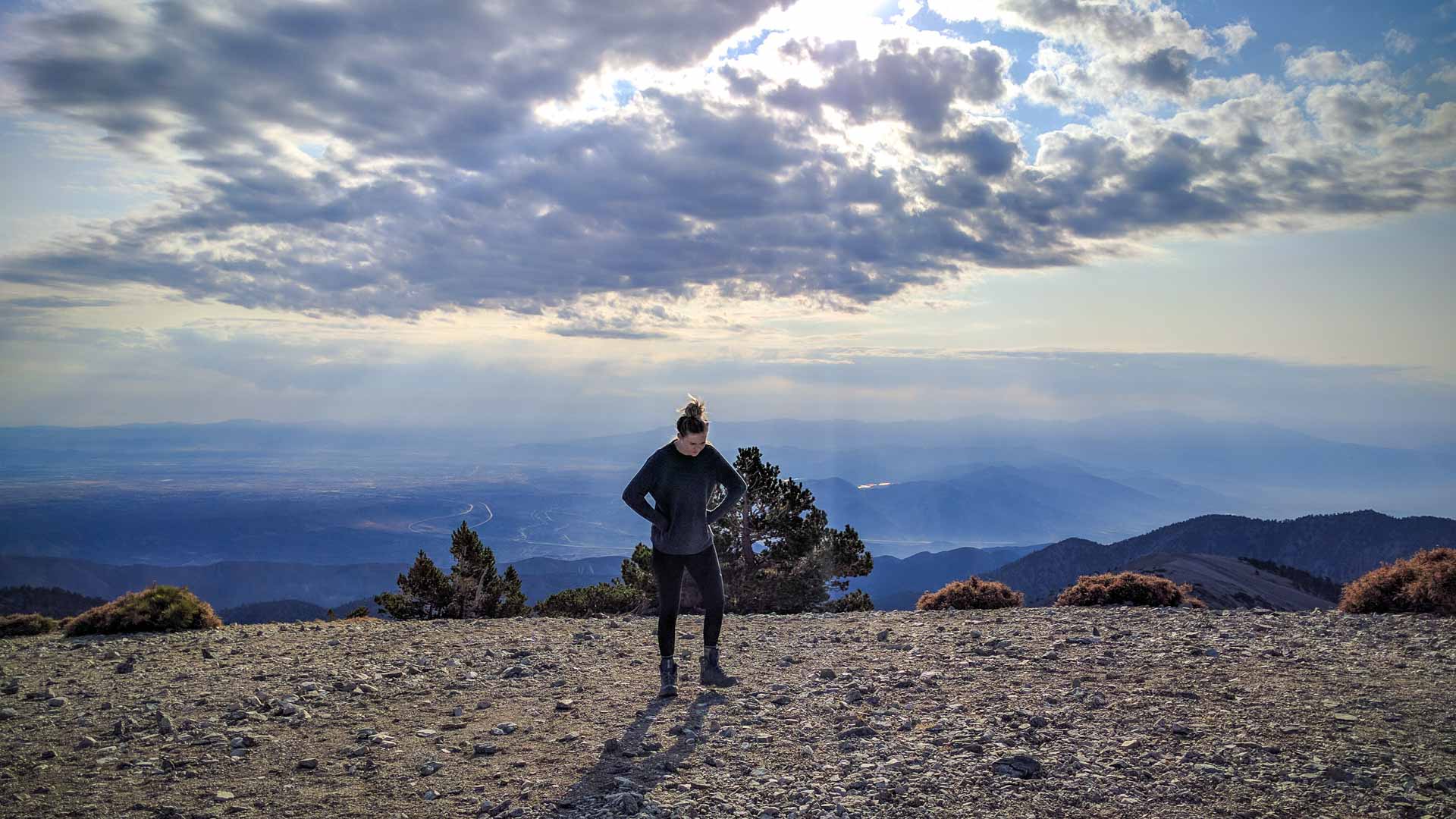 We were all relieved when the sun came up and ended the night that seemed to go on forever. The hike down was uneventful and I ended up going to bed early that night to sleep off the whole thing.

In hindsight, hiking Baldy at night was a stupid, awesome idea that I’m glad we did. Most of it was pure suffering, but I still look back at the time fondly. I don’t know why. It’s not an adventure without the possibility that everything will go wrong – or that we’ll even die in the process 🙂 When we push ourselves, take risks, and problem-solve in the face of a difficult task, it bonds us together. It feels fulfilling and meaningful. This is one of the great mysteries of being human and something I doubt I’ll ever understand.

I’m ready for another adventure. Let’s come up with another stupid, awesome idea.

Buy the Map of this Area on Amazon.com Download GPX Fle A Sleepless Overnight on Cucamonga Peak