Bryan Feller • August 6, 2020 • 618
Share 0
Last year, when Wes and I took a trip to the summit of Mount Bago, we looked down on Charlotte Dome and made a pact that we would climb it together. Soon after, Liz (Wes’s wife), got pregnant with their first child and it didn’t seem like a great idea to take him on a multi-day climb with a new baby in the house. But I couldn’t just leave it alone, so I found the Mount Conness day climb on the Sierra Mountain Guides site and signed up – and talked Wes into going as well. Liz, being a climber herself, was gracious enough to let him go, which I am very thankful for. I definitely owe Liz her own adventure!

Wes and I left from Riverside on Friday afternoon and got to the east side of Yosemite by early evening. As expected, all of the campgrounds were full, so we just found a dirt spot 100 feet off the road and deployed the roof tent. It was less than restful, as 20 other people had the same idea during the middle of the night. I must have been awakened five times that night by headlights of cars trying to find a spot near us. We didn’t sleep well, but we slept well enough. I think Wes fared better than I did.

We got up at 4am, had breakfast and coffee, and drove 15 minutes to the trailhead. Unfortunately, we parked 500 feet away from Neil, our guide, and it took us until 5:45am to find him. By 6:00 AM we were on the trail, walking alongside Saddlebag Lake as the sun cast its alpine glow on the mountains ahead.

The trail follows a drainage with views of creeks, small waterfalls, and lakes made of pure glass. In the photo below, the lake is so still, it’s hard to tell where the water begins and the terrain begins because the reflection is so flawless. 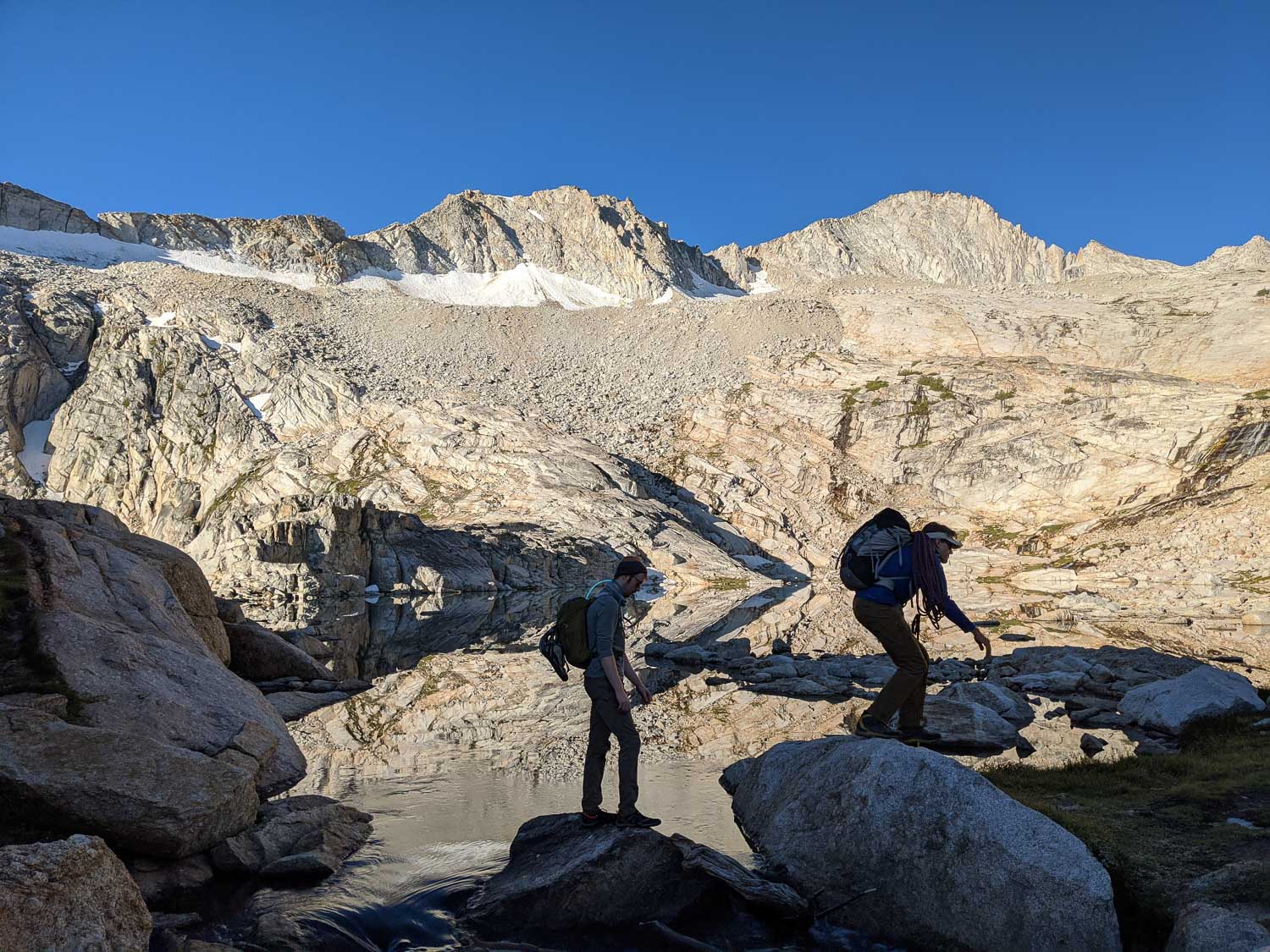 We soon reached the end of the box canyon and had to climb out toward the North Ridge of Mount Conness. This segment of the climb was a slog of loose scree and talus. This is the price of admission for every Sierra peak I have been on, but it wasn’t too bad. The weather and the views were absolutely breathtaking and it was only getting better the farther we went.

Once we reached the ridge, we put on harnesses and helmets and started the ridge walk. I found myself panting a lot more than I thought I would – feeling the altitude. Maybe I just didn’t get a good night’s sleep? Altitude is a fickle thing. Fortunately, Wes was feeling great.

Soon the class 2 ridge turned to class 3/4 so we roped up alpine style and continued walking. There were a few sections of the ridge Neil climbed ahead and gave us a hip belay, but we never needed to set up any belay anchors along the ridge. This place was so beautiful it was hard to take it all in. And I got to do this with my son – who gets to do that?

There is a large gendarme (pinnacle of rock on a mountain ridge) next to Mount Conness and we soon found ourselves at the top of it. From there we rappelled down 300 feet to the upper mountain where we began our climb.

Rated at 5.6 or less, the climbing on Mount Conness was quite easy. That said, there were some amazing sections of exposure climbing along the upper ridge. At times, I really had to focus on what I was doing rather than take in the views. I found myself pondering the idea of beauty while I was on that ridge. Beauty is not just seeing something pretty. In that case, looking at an Instagram feed would be fulfilling – but it’s not.

Beauty is not just seeing something pretty. In that case, looking at an Instagram feed would be fulfilling – but it’s not.

There is a dimension of beauty that requires us to be a participant, and even to suffer for it, before it can really change us. This place had all of that. Being in this place and experiencing the beauty of it from a knife-edge exposed ridge felt as though I had been raptured into some kind of third Heaven. In some mystical way, I was filled with hope, joy, strength, peace, and connection from the experience. And I was in that place with my son! When I home, and even now as I write this, I can still tap into that feeling.

It’s hard to put into words, but I will always remember how it felt.

The higher we got, the more spectacular the views were. Neil continued to call out the sections of exposed terrain just before we got to them so we could be present in the moment and not just heads-down climbing to the next move. I was so thankful we did this with him. I think every outdoorsman should use a guide from time to time. A guide can allow you to safely get out of your comfort zone, learn some new skills, AND enjoy what you are doing without being terrified you are going to get killed or injured.

A guide can allow you to safely get out of your comfort zone, learn some new skills, AND enjoy what you are doing without being terrified you are going to get killed or injured.

Because we had a guide, Wes and I were free to enjoy the views along the way, rather than being 100% focused on our survival. This was a huge blessing. 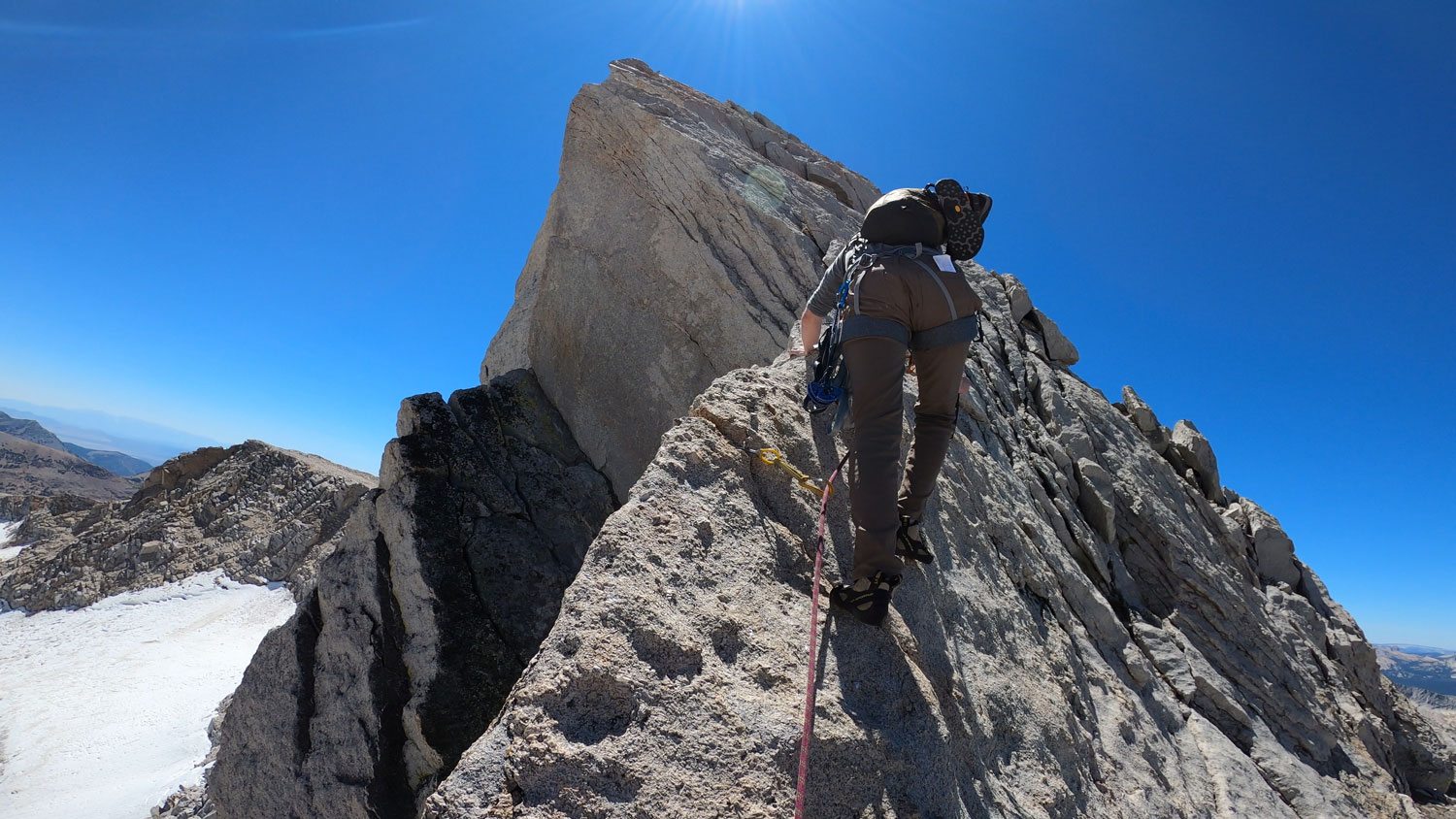 The Summit of Mount Conness

We got to the summit and had a snack before heading down the walk-off route. The walk-off felt like a long way. It was off-trail all the way to the trail head and at least 80 degrees by the time we reached the car. That said, the views on the descent were just as spectacular.

Neil said we did the whole thing in about 10 hours, which was average. I wish I could have been better than average, but I’ll have to keep training harder for the next one. While the climbing itself was easy, moving quickly up the mountain was tougher on me from a cardio standpoint than I expected. More training is needed.

I will always remember this climb – the beauty of it, the challenge, and the blessing of being able to do it with my son. I want to do a lot more of these kinds of adventures and I’m going to continue to train so that I can – all the way into my 80s if that’s possible. On the way home, Wes and I talked about doing Charlotte Dome next year. I can’t wait! 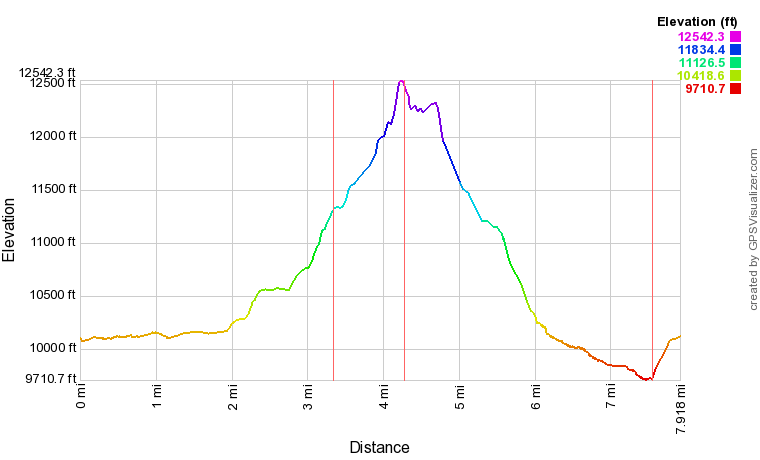