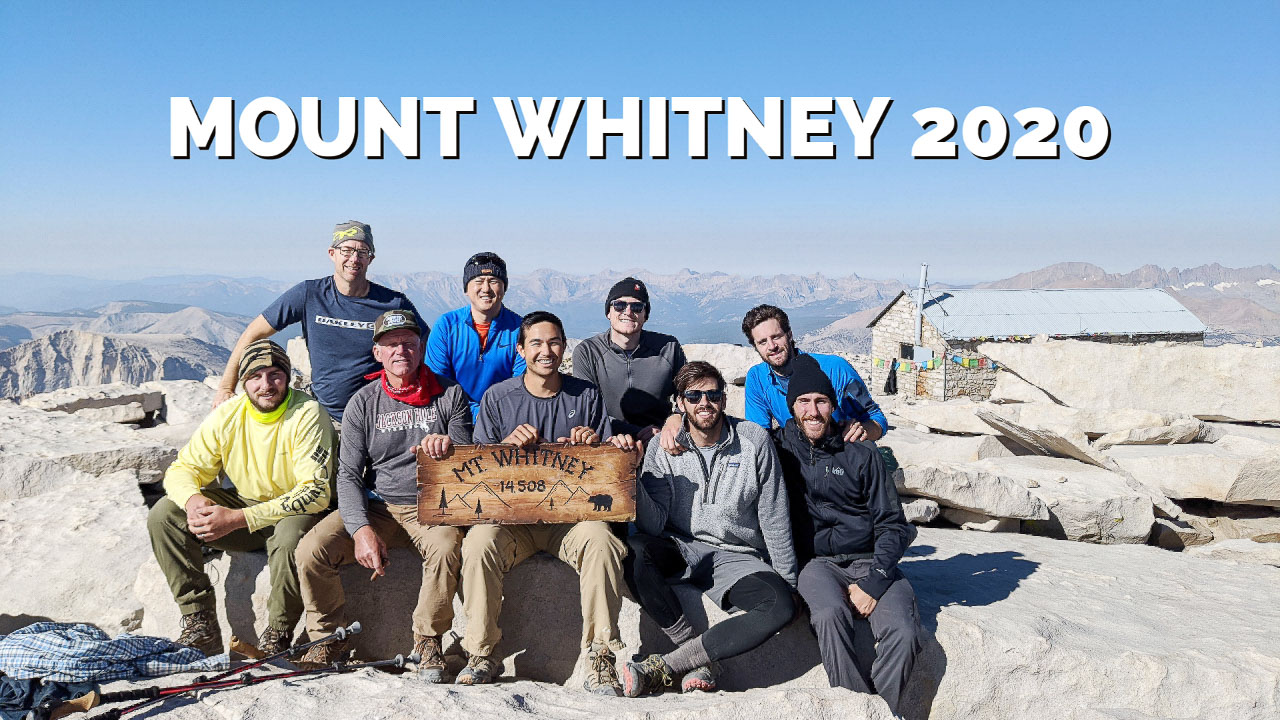 Mount Whitney is a magical, iconic peak in an area known for its rugged alpine beauty. I usually prefer exploring places I have never traveled in, but Mount Whitney is an exception. I’ve been to the summit twice already, but I’ve continued to apply for the permit lottery for the past three years. This year, by a miracle, I got a permit for 10 spots! Some friends of mine, Steve, Sam, and Chris, said yes. And Chris was able to invite five more of his friends: Tad, Lee, Daniel, Pete, and Kyle. And at the end of the day – everyone made the summit! Our adventure was not without its difficulties. More about that later.

Our Alpine Start at Whitney Portal

We started out at midnight just to make sure we had enough time since I had not hiked with most of the folks on our team. In hindsight, I’m really glad I did. We ended up needing the extra time. More on that later. On the day of the hike, I drove up in the late afternoon and slept in the back of my Subaru Outback until 11:30 pm. After breakfast and coffee, I met the rest of the guys at the trailhead. We were all on-trail by 12:15 am. I didn’t plan it, but there was a full moon that night that made the night hiking a lot more fun.

The Sunrise was Worth the Trip

After hiking through the night, we started up the 99 switchbacks as first light became visible. As I made my way toward the top of the ridge, the sunrise was as spectacular as always from that vantage point. As the sun came up, I could see hikers lower on the switchbacks all stop and stare at the spectacle. It was like we were all in a giant opera house watching some grand performance on a super-sized scale.

It was like we were all in a giant opera house watching some grand performance on a super-sized scale.

You have to be there to really appreciate how cool this is. For me, the sunrise was worth the whole trip.

We took a short snack and nature break at Trail Crest. The rest of our group caught up and we started moving again. While most of us were finding rocks to pee behind, one of us took the opportunity to take the most epic pee in the High Sierras. We salute you!

My pack didn’t weigh much, but I still dropped it at Trail Crest. When I returned for it later, I discovered a marmot had unzipped the zipper and stole my food bag. I’ve got huge respect for an animal without opposable thumbs that can operate a zipper. He deserved every morsel.

We continued on the final two miles to the summit, stopping to look through the “windows” – those spaces between the pinnacles – along the way.

Our team made the summit between 8:00 am and 8:30 am. We all spent some time milling around admiring the views and snapping photos. The weather was perfect. I was feeling pretty good and wanted to tackle Mount Muir on the way back, so I made a call for volunteers. Steve said he was in, so we headed down the trail. We had planned on meeting back up with the rest of the guys at Trail Crest. What I didn’t realize at the time was that a couple of our guys were in bad shape from altitude sickness and dehydration.

Steve and I quickly found Mount Muir and scrambled up 400 feet of talus to the summit block – a 100-foot granite crag. At first it looked a bit sketchy, but as I probed for a route, I found one without too much difficulty. It was solid class-3 climbing. There were two climbers ahead of us and we eventually all ended up on the 4-foot-square summit together.

There were two climbers ahead of us and we eventually all ended up on the 4-foot-square summit together.

We signed the register and took photos of each other before heading down. For not having much climbing experience, Steve moved up and down the class-3 section flawlessly.

What Do You Do at Your Physical Limit?

As we descended back down to the Whitney Trail, we heard the first news that we had two members of our team with altitude sickness. One had been struggling with altitude sickness since we began the hike. He seemed to be struggling on the way up, but he pushed through the pain so well that it really masked how bad his symptoms were. We had another team member bonk from dehydration and lack of food.

Both of them were really weak, and both had vomited.

Both of them were really weak, and both had vomited. When we saw them again, they could walk on their own, albeit with difficulty. All this made our descent painfully slow, but everyone stuck together until the end. We reached the trailhead 17 hours after our start time. To say it was a long day is an understatement. But we made it!

As I walked these guys off the mountain, I kept thinking of that Teddy Roosevelt quote about the “Man in the Arena.” These guys were the men in the arena. They said yes to the call of adventure and started the chain of events that brought them to their physical limit – then they pushed through. They probably didn’t feel like they were inspiring anyone that day, but I was inspired.

It is not the critic who counts; not the man who points out how the strong man stumbles, or where the doer of deeds could have done them better. The credit belongs to the man who is actually in the arena, whose face is marred by dust and sweat and blood; who strives valiantly; who errs, who comes short again and again, because there is no effort without error and shortcoming; but who does actually strive to do the deeds; who knows great enthusiasms, the great devotions; who spends himself in a worthy cause; who at the best knows, in the end, the triumph of high achievement, and who at the worst, if he fails, at least fails while daring greatly, so that his place shall never be with those cold and timid souls who neither know victory nor defeat.

It’s only when you hit your physical limit that you know what you are really made of. I watched one of the guys projectile vomit four feet in the air. I’m not exaggerating. It was really four feet. I can still replay that moment like it just happened. It was impressive by anyone’s standard. Then he got up and kept walking. That’s impressive.

The other gentleman literally summited Mount Whitney while having altitude sickness from the trailhead. By the time he finished the hike he could barely keep his balance. That’s really impressive. That’s what good looks like.

By the time he finished the hike he could barely keep his balance. That’s really impressive. That’s what good looks like.

That’s how you embrace the suck and push through the pain. I can’t say I would have done the same, but the next time I’m at my physical limit, I’m going to remember how these guys carried themselves and do likewise.