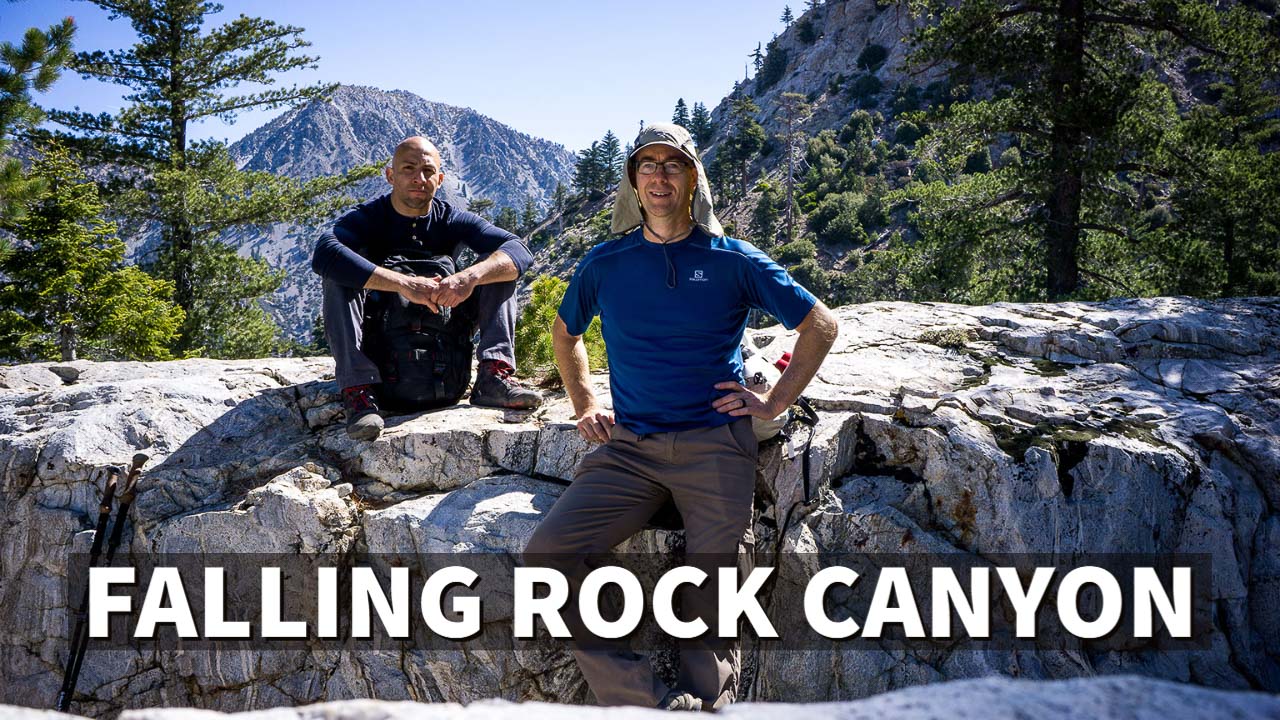 Last month, I talked Manny Castaneda into a failed attempt at Condor Peak. It was rough. Epic rough. I’m not sure how, but somehow I managed to talk him into another hike – which would prove to be more “epic rough” than the last one. Our objective: Ontario Peak via Falling Rock Canyon. This little-used off-trail route begins at the Icehouse Canyon trailhead. After a half-mile, the route cuts across the creek then follows a steep avalanche chute to Sugarloaf Peak. From there, the hike follows the contours of the ridges that connect the mountains to the summit.

The canyon is lush and forested, but the further you go, the forest transitions into loose sand, scree, and boulders. Eventually, the route became so steep that we eventually had to climb side-by-side due to the boulders we were kicking loose with each step. It was nearly impossible to climb without creating a small avalanche. Fortunately, no one was below us. I didn’t think of bringing helmets, but I should have.

It was nearly impossible to climb without creating a small avalanche. Fortunately, no one was below us. I didn’t think of bringing helmets, but I should have.

As we approached the last 500 vertical feet toward Sugarloaf Peak, we became mired in deep sand and huge loose boulders. At one point, Manny’s attempts at trying to secure his footing turned into dog-paddling through the sand to keep himself from sliding down the shoot with the boulders he was kicking loose.

At one point, Manny’s attempts at trying to secure his footing turned into dog-paddling through the sand to keep himself from sliding down the shoot with the boulders he was kicking loose.

Understandably, Manny was a little nervous. I have to admit, I was too. I thought about descending at this point, but I felt like it would be safer to push to the summit. If we could reach the summit ridge, we could descend on a well-established trail.

Near the top, it was extremely steep and loose class 3 bouldering, except every time we grabbed a handhold on a secure rock, the rock came loose in our hands. Every move had to be made slowly and with great care through this section. Eventually, we made it to the ridge of Sugarloaf Peak where we could stand up and walk to the summit. It was a perfectly cool, clear day. We saw Ontario Peak across the valley, which was connected by a lower ridge. We took a much-needed 20-minute break and snapped some pictures.

As we crossed the narrow ridge between Sugarloaf and Ontario Peak, we lost some elevation, but at least there’s no more loose rock or avalanche chutes. Still, it is really steep, as in “Register Ridge on Mount Baldy” steep. We slogged our way up for what seemed like forever, and every time we’d think we were almost to the top, there was always more mountain to climb.

Eventually, we acquired the ridge, which led us to Ontario Peak. It was a “June Gloom” day across all of southern California, but the cloud line was at 7,500 feet. From our perspective, we were greeted by a sea of clouds extending all the way to the ocean. It was breathtaking.

After a lunch break, we decided to cut across and try to reach Bighorn Peak. Manny seemed a little reluctant after that miserable slog up Ontario. It looked really close, but it turned out it wasn’t. We were both pretty beat, but we pressed on and made Bighorn Peak. On the way down, we had planned to connect to the trail and follow it back down to Icehouse Canyon, but somewhere along the way we lost the trail. Thanks to how tired we were at that point, we just took kind of a steep shortcut to the Icehouse Canyon trail.

Overall, I don’t think I ever want to do this hike again. It was just too dangerous with all the loose rock. To quote Manny: “It was one of the hardest things I’ve ever done.”

It was one of the hardest things I’ve ever done.

I won’t disagree with him—on a scale of one to ten, that hike was probably an 8. The steepness reminded me of Mount Rainier without the glacier. The devil may not live on Diablo Mountain, but there are a lot of falling rocks that live in Falling Rock Canyon. I don’t care to visit them again anytime soon.