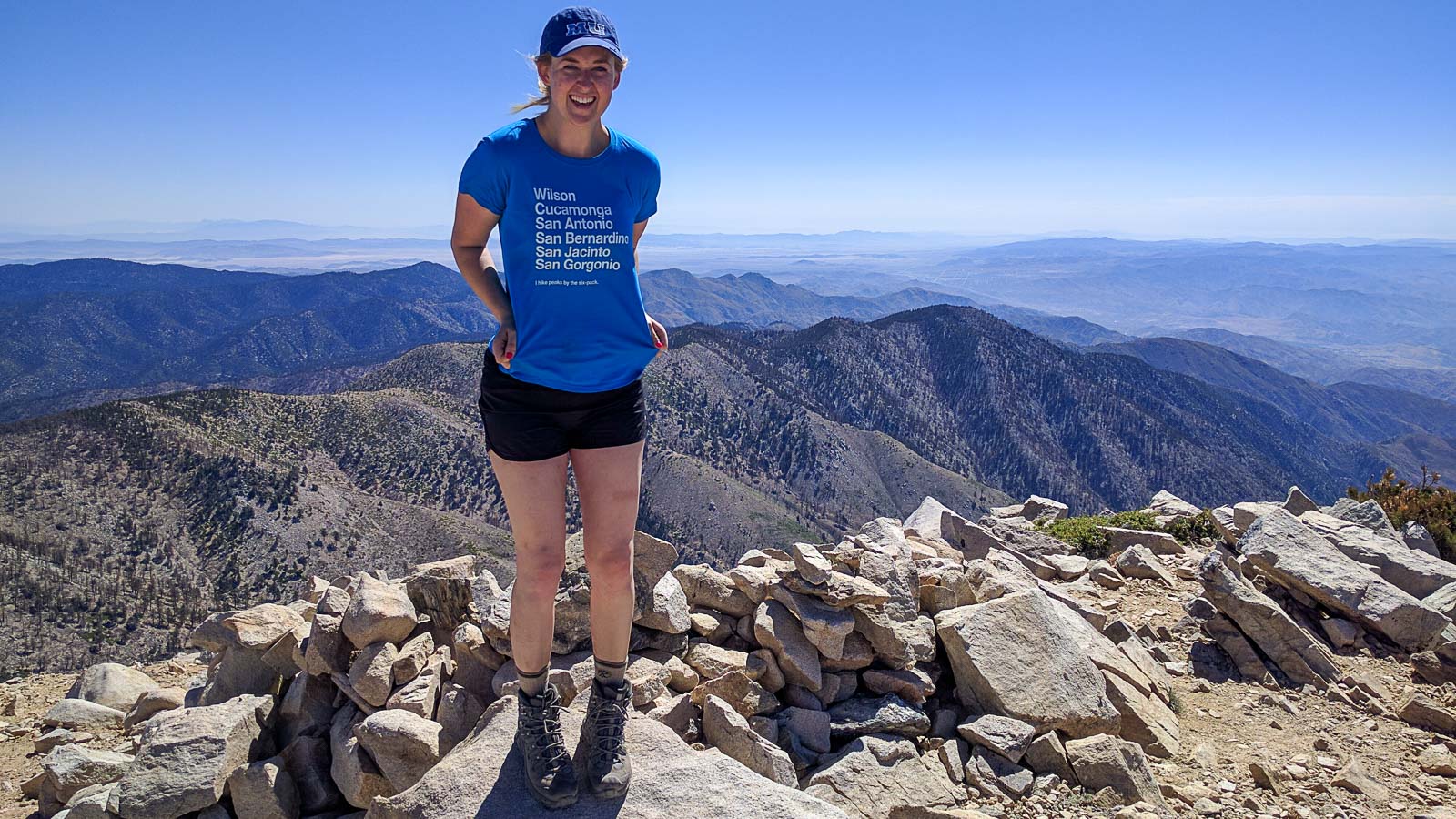 I got some permits but Courtney couldn’t make it on that day, so I went by myself. We tried another time, but again, Courtney couldn’t make it at the last minute. I ended up going alone up San Gorgonio Mountain four times in a six-week period (which, by the way, is a great workout). Guys all around the world want calves like mine, and San Gorgonio is how you get them.

The hike is a 6,500-ft elevation gain over the course of 18.5 miles up and back. On a good day, I think my best time on San Gorgonio Mountain by myself was about eight hours, which was slightly faster than a moderate pace. My longest time was over ten hours when I didn’t get a lot of sleep the night before.

Courtney and I finally coordinated our schedules, but I just wasn’t sure she was ready to go that far or high in one day. I decided to try an overnighter instead of pushing through a whole day.

On the Friday afternoon we left it was in the upper 90s in Riverside, but the temperature dropped to 76 once we arrived in Forest Falls. We planned on camping at the first campsite on the trail, which is about three and a half miles in. The beginning of the trail includes steep switchbacks before opening into a lush valley. However, the sun sets very quickly in this valley due to the high walls on either side, so it was practically dark as we hiked in.

We were using our headlamps by the time we reached the campsite. Normally this would be a time to unwind, but we were both so tired we decided on getting some sleep right away. Unfortunately, neither of us slept more than an hour that night. It was one of the worst night’s sleep of my life. I think it must have been a combination of not properly winding down after a hard hike, a full moon, and the altitude change.

Needless to say, we were pretty shot the next morning. I had Courtney hike without her backpack to increase her chances of summiting. It’s not easy to hike when you’re fried from a lack of sleep. By the time we reached High Camp, Courtney’s energy was drained. We downed breakfast bars and a 5-Hour Energy. I figured we’d just do our best and turn back if we had to.

We followed steep switchbacks past High Camp to the ridge leading to the summit. Once on the ridge, it’s about 90 minutes at a reasonable pace to the summit. Courtney needed ANOTHER 5-Hour Energy. Child Protective Services would probably inquire about my parenting if Courtney were any younger. Luckily, it was just what she needed. Ninety minutes later we reached the summit. What a sense of satisfaction, especially when neither of us was feeling great.

Coming down was long and hard, but I wasn’t going to give Courtney another 5-Hour Energy and risk dragging her body down the mountain after heart failure. We reached camp, packed up our gear, and continued down. By that time the sun was blazing overhead. The temperature was a punishing 85 degrees and completely sapping our strength as we neared the trailhead. It felt heavenly to take off our boots and get into an air-conditioned car.

As I think back about doing the Six Pack of Peaks with Courtney, it was a pretty magical time. After this, Courtney got busy with life and we haven’t done much hiking since then. It reminds me, once again, to live in the present and be thankful for every day God gives me on this earth.

Courtney and I Finish the Six Pack of Peaks

Here are the photo finishes of Courtney and I summiting the Six Pack of Peaks: Wilson, Cucamonga, Baldy, San Bernardino, San Jacinto, and San Gorgonio Mountain.

Courtney and I hike Mount Wilson