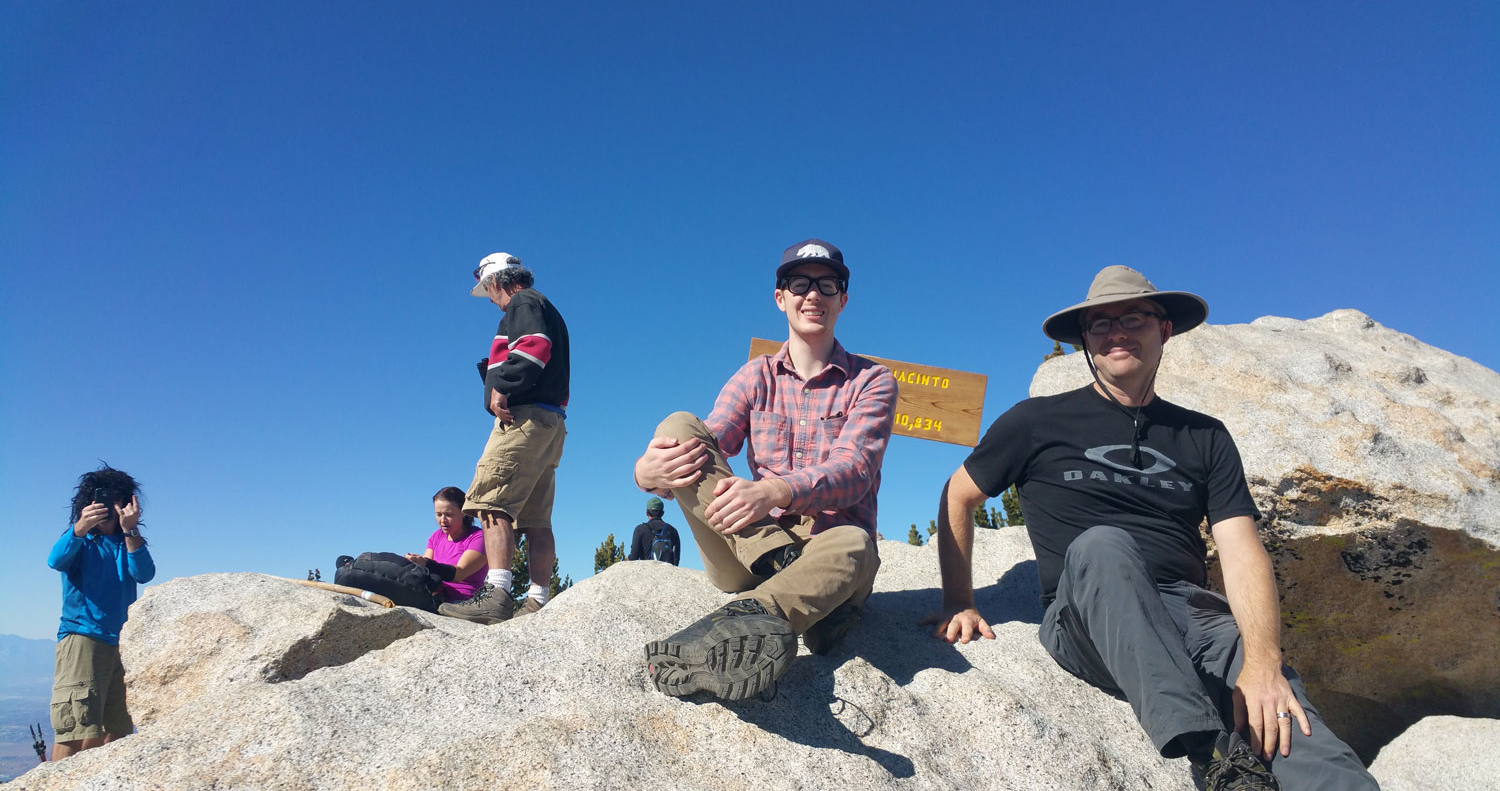 I had been to the summit of San Jacinto from the tram station decades ago, but I had never been up the mountain via the Marion Mountain Trail. This is the most popular route to the summit. This was my fifth peak of the Six Pack of Peaks and I managed to talk my son Wes into coming with me.

We got to the ranger station in Idyllwild by 7am to get permits and we were on the trail by 8am. Before getting on the trail you will need to drive past the trailhead to the town of Idyllwild to get a hiking permit at the San Jacinto Ranger Station, then drive back up Hwy 243 to get to the Marion Mountain Trailhead.

This was Wes’s first time up a big mountain and he was huffing and puffing as soon as we started out from the trailhead. This is pretty normal, even for seasoned hikers. It takes a mile to transition from sitting in a car at 1,000′ to hiking up a steep hill at 6,000′.

This trail doesn’t give you much time to warm up. It’s steep and it stays steep all the way to the summit. We took a few breaks and, like clockwork, Wes started feeling OK after the first mile. This is a beautiful hike and is heavily forested most of the way. At times it almost feels like you are in the High Sierras.

It took us about two and a half hours to reach the summit. The summit itself is a rock scramble that leads to some amazing views. From the summit, you can see Catalina Island on a clear day. You can see Palm Springs, the Salton Sea, and all across the vast deserts on each side. John Muir himself said of this view…

The view from San Jacinto is the most sublime spectacle to be found anywhere on this earth!

I think John Muir might have had too much to drink that day. There are definitely more beautiful views in the world than the Inland Empire. That said, we were pretty pumped to have made the summit.

It was Halloween and there were all kinds of people who brought costumes that they changed into for pictures and drinking. Wes and I were shocked that someone would hike 4,000′ up a steep mountain on a hot day and drink alcohol. To each, his own.

The hike down was pretty punishing on the knees. Wes was completely done about halfway down. He stopped talking as he went inside his own head to endure this sufferfest. Getting to the car, we did the final high-five for the round trip and started home.

My quads were toast the next day. Wes reported the same. This hike is a butt-kicker, but well worth it.

The 7,300′ Climb to the Summit of Iron Mountain

Hardship & Glory on Cactus to Clouds