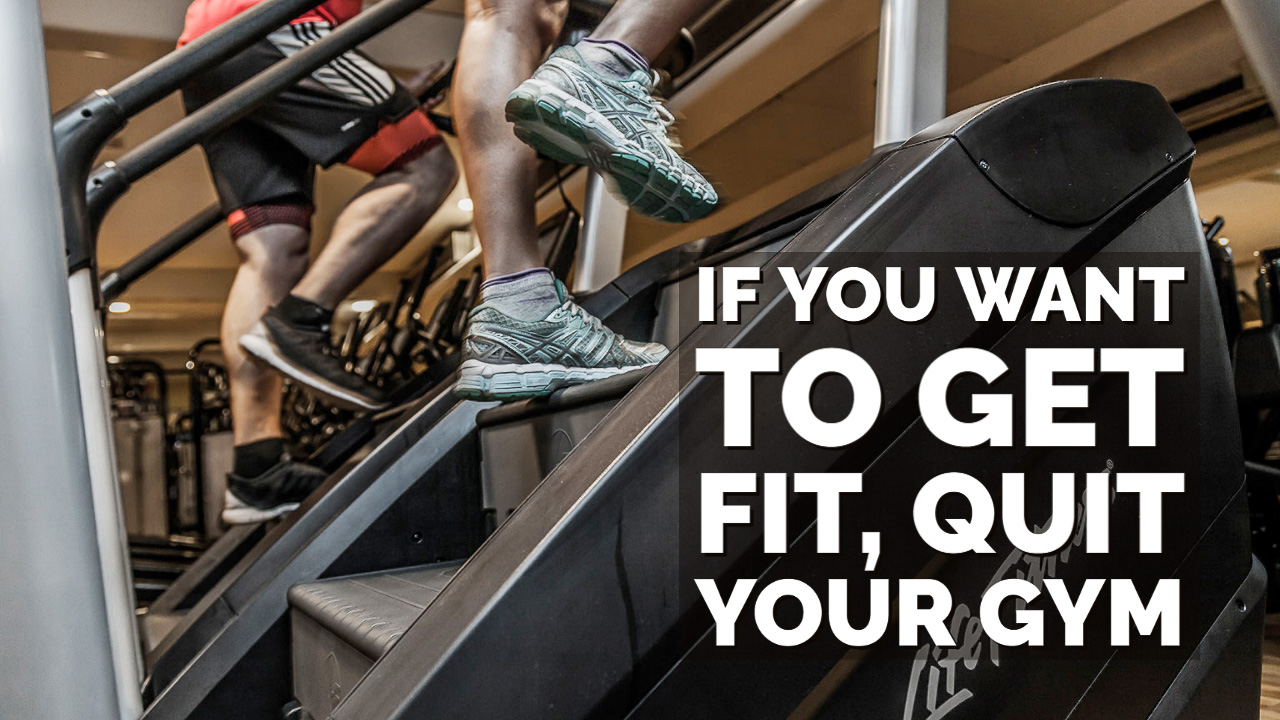 If You Want to Get Fit, Quit Your Gym

When Working Out Works

I am trying to run, but my body is only moving at a fast walk across a parking lot. I have a 44lb kettlebell in one hand and a 55lb kettlebell in the other. The different weights are by design – it makes them harder to carry. My lungs are heaving. My arms and legs are on fire. I am near the end of the last 20 unforgiving minutes of a CrossFit workout. I cross the threshold of the gym’s roll-up door, drop to one knee, and gasp for breath. Coach Jennifer gives me a “good job” fist bump, then writes my time on the whiteboard next to everyone else’s. My comrades doing the workout with me are finishing one by one.

In a few minutes, we are all lying on the floor looking up at the ceiling – lungs heaving. We are all waiting for our heart rates to drop enough so we can stand up again. Affirming nods, high fives, and “good jobs” are exchanged before we head to our cars. I can feel myself getting stronger, faster, and physiologically younger. I admire the beautiful sunset as I walk to my car and give some gratitude to the Almighty. It feels great to be alive.

Affirming nods, high fives, and “good jobs” are exchanged before we head to our cars. I can feel myself getting stronger, faster, and physiologically younger.

Fast-forward the clock. I sprained my ankle and broke a few ribs a month ago in a rock climbing mishap. Ribs take a long time to heal and I have not been able to return to CrossFit yet. I still can’t lift weights without re-injuring myself, but walking feels fine. So I’ve not only been walking, but also hiking and training hard on the stepmill five days a week. I’ve got big adventures coming up this summer and I can’t afford to sit around and atrophy.

When Working Out Sucks

I am back at LA Fitness until then, using their stepmill, that escalator commonly known as a “Stairmaster.” As I walk in the front door the young lady at the counter smiles and scans the barcode on my phone to check me in. It’s been a while since I’ve been to a regular gym and it feels very different now. I’m not sure why.

As I approach the row of stepmill machines I see three people leaning over, supporting themselves on the rails of the stepmill while the stairs slowly move underneath them. They look utterly exhausted, but they are barely moving. They are 20 and 30-year-olds moving like 90-year-olds. It’s so pathetic, it offends me. I feel like yelling something sarcastic such as, “You’re all a bunch of weenies! All you are doing is training yourself to use a walker up a moderately steep hill. Stand up straight, pick up the pace, and do it like you mean it!”

It’s so pathetic, it offends me. I feel like yelling something sarcastic like, “You’re all a bunch of weenies! All you are doing is training yourself to use a walker up a moderately steep hill…”

It’s pointless. They all have headphones on – watching Fox, CNN, or the Kardashians on their personal monitors. We are all right next to each other – by ourselves. It’s like a bad sci-fi movie. In a moment of realization, I understand why I hate the gym. It’s an energy vacuum. Everyone is alone and no one is really trying. But why?

I start my workout. After a 65-step-per-minute (SPM) warm-up, I crank it up to 100 steps a minute for a high-intensity interval cycle. My goal is 5 miles in under 60 minutes, but after 3 miles I find my will faltering. I’ve done this workout many times, but today I find my mental resolve weakening. My heart rate gradually increases with each intensity interval. I know I have to muster more willpower, but if I give up now, who will ever know? I “feel” like I am at my limit, but I am nowhere near my limit. Today, the only strength I have comes from me, and I’m out. I make it to my goal today, but just barely.

As I walk out of the gym, I think to myself, “This sucks.” In another 3 weeks, I’ll be back at CrossFit. I’ll be back with my tribe and I’ll really be able to push my limits again. At this point in my life, I am uniquely aware of how the others in my life impact my performance. The gravity of this personal discovery causes me to pause. I spend so much energy pushing by sheer will, not only in my fitness but in every area of life. I rarely take advantage of the power others can have in my life – and I need to.

More When There is No More

In his book, The Power of the Other, Henry Cloud illustrates the impact that connection with others has on our performance in practically every area of our lives. In the book, he recounts the story of his son-in-law, Mark, who was a Navy SEAL. SEALs have to complete a program called BUDS (Basic Underwater Demolition SEAL) training and must pass the test of “Hell Week,” a grueling exercise designed to push candidates to the limits of human endurance. Those who pass become SEALs. Those who fail, don’t. Mark had made it to shore on the final test of Hell Week. Bryce, his friend, was still in the water.

Completely spent, Bryce had nothing left in his tank. He was about to tap out and “ring the bell,” signaling his failure to complete the course and initiating his rescue from the icy water. In that moment, Bryce looked up and saw his friend Mark on the shore. They locked eyes and Mark gave him a fist pump and a yell. Defying the limits of his physiology, Bryce tapped into a source of energy he had no access to up to that point. He finished the course and became a SEAL.

Defying the limits of physiology, Bryce tapped into a source of energy he had no access to up to that point. He finished the course. He would be a SEAL.

The power of that connection with others can have a significant effect on our fitness and on our lives.

The Myth of the Self-Made Man

In his book The Neurobiology of We, Dr. David Siegel makes an interesting distinction between the brain and the mind. He describes the brain as the hardware that the mind runs on. According to Siegel, the mind is the flow of energy and information in our consciousness. By this definition, the mind is shared between people, making us profoundly interconnected. Energy flows between neurons through synapses inside our brain, and energy flows between people through a similar mirroring system.

First observed in macaque monkeys, scientists discovered that “mirror neurons” allowed the monkeys to “experience” actions in their minds simply by watching the actions of others. We don’t exactly know how this mirroring system works in people, but we do know it exists. Most scientists agree that this mirroring system is what allows us to develop empathy and much more.

So while we might see ourselves as “self-made” men and women, there really is no such thing. Our dependence on, or connection with, others starts at birth and lasts through our lifetime. We know that healthy, well-fed babies who are deprived of human connection have lower body weights, experience more illness, and have less-developed brains than babies who experience regular, caring human connections. The lack of connection with others literally creates incomplete connections in our brains, leaving a deficit that can impact every area of our lives. The connections with others in our lives largely determine our potential in virtually every area of our lives, fitness included.

In the study, “Is Poor Fitness Contagious? Evidence from Randomly Assigned Friends,” researchers found that up to 70 percent of your fitness level can be explained by the people who are your friends. Sadly, the evidence suggests that these effects are caused primarily by friends who are the least fit, thus supporting the frightening notion that poor physical fitness spreads on a person-to-person basis. This is Henry Cloud’s idea of the “the power of the other” working in reverse.

Sadly, the evidence suggests that these effects are caused primarily by friends who are the least fit, thus supporting the frightening notion that poor physical fitness spreads on a person-to-person basis.

How Then Should We Stay Fit?

We’d all like to be fitter and healthier. Yet the solutions we turn to for help often fail to deliver – big box gyms and popular diets. Logically they make sense to us, but they are out of sync with how people are actually made to operate. Getting and staying healthy is about connections with people, not machines and programs. From the middle-aged overweight guy to the world-class athlete, both are completely dependent on the people in their lives to build and maintain their fitness.

How then should we stay fit? Here are a few things to consider:

For starters, before you make that New Year’s resolution, get a team of folks who are going to do it with you. Who you do it with is as important as what you do. I’ve watched people get on some pretty dumb diets and still get results if they have people doing it with them. It’s not that magic “detox” shake you drink every morning, it’s your diet buddies who give you the conviction and resolve you need to lose those 20 pounds.

Second, if you want to get your fitness up, don’t get a big box gym membership. For most people, this is a road to nowhere – unless you get a trainer or friends to go with you. Trainers are surrogate fitness friends and they work.

Here is the best idea yet. Find a sport and join a club – running, cycling, hiking, triathlons, adventure races, you name it. This works. Pick something that builds cardio AND strength. As we age, we lose muscle and bone mass, and strength training helps us minimize this.

Join CrossFit! I’m a true believer. Many people think CrossFit is a cult and there is a lot of merit to this description. Seemingly normal people are driven to the limits of their fitness endurance and love it so much, they “evangelize” others. CrossFit works because it is a surrogate family for fitness. There are technical things that make it particularly useful as well, but it’s the connections with people that is the magic sauce.

Don’t kid yourself. You’re not a self-made man or woman. If you want to get fit, you’ve got to do it with others. Good luck!

My Second Year of CrossFit: The Magical Power of Consistency

You MUST have a Sport to Stay Fit Over 50!