The Iron Mountain Trail Gains 7,300′ of Elevation. No Kidding.

"Big Iron," as some call it, is one of the toughest hikes in Southern California - but well worth the effort.

Bryan Feller • April 11, 2019 • 822
Share 0
While Iron Mountain, also known as Big Iron, is far lower in elevation than other Southern California summits, it is the most difficult mountain to climb in the entire region. The trail follows a series of high mountain ridges to the summit, gaining 7,300′ of elevation – 3.500′ in the last two miles alone.

My friend Robert and I thought we were getting an early start on Iron Mountain, but unfortunately, we went to the wrong trailhead. My bad. We ended up hiking about a mile and a half before we realized we were completely off route. After backtracking and driving down the road a bit further, we got to the real trailhead – which starts at the same place as the “Bridge to Nowhere” trail does.

So we got a little bit of a later start, probably 7:00am. We started up some pretty gentle switchbacks to get to a ridge. And then we followed a higher ridge that had some beautiful views. We could clearly see all the snow on the north side of Mt. Baldy and along Iron Mountain on the left-hand side as we approached. At some point in time, maybe four miles in, we had to drop down to access another ridge, losing quite a bit of elevation, and then go back up the steepest part of the trail to the summit.

The last two miles of this hike gains about 3,500 feet in elevation, which is pretty darn steep. So it was tough, but it was beautiful along the way. There was a little bit of snow at the summit, but that was about it. Unfortunately, Robert had a commitment and he had to be off the mountain by 3:00, and our going to the wrong trail had cost him the summit. So he actually ended up having to turn back about a half hour before I reached the summit.

We passed another hiker coming down and he said it was another hour to get to the summit. However, that time frame was actually only because he was pretty slow. It ended up being about 20 minutes for me to get to the summit. After 7,300′ of elevation gain, it had been a tough day. But it was absolutely beautiful.

Coming down felt somewhat dangerous. There are huge man-eating Yucca plants that if you slip, you could fall on one and literally puncture your hands and arms, and maybe even your chest cavity, and really injure yourself. And the trail is just so steep that it’s almost impossible not to flail and slide a bit for that last two miles.

I was about a mile from the car when it got pretty mind-numbing. I had descended 7000 feet and at that point, I was just plain tired. I was really looking forward to getting to the car and I was not paying attention as well as I should have been. I just about stepped on a small two and a half foot rattlesnake that had spanned the trail. In fact, I think my foot might’ve touched him. I jumped back but he didn’t move.

I was really looking forward to getting to the car and I was not paying attention as well as I should have been. I just about stepped on a small two and a half foot rattlesnake that had spanned the trail.

For a minute, I thought he was dead, but I think he was just cold because he was in the shade. I ended up poking him a few times and he slowly slithered away. He really wasn’t in a hurry or aggressive, but I think he would have gotten aggressive had I stepped directly on him!

So disaster was averted. It felt pretty good to get off the mountain and make my way home.

I think the next time I go up that trail, I am not going to come down the same way. I’m just going to go across the San Antonio Ridge and summit Mt. Baldy, then go down the other side. I’m looking forward to that one. It’s a little more of an elevation gain, but I think it’ll be a lot more fun. And it might even be a little safer. 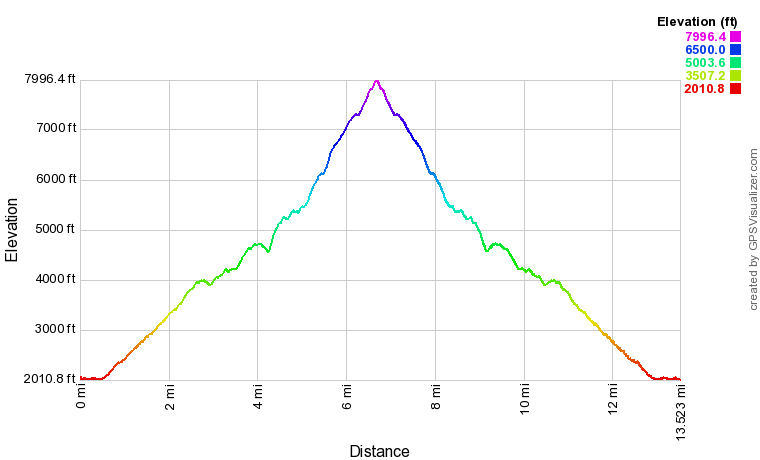