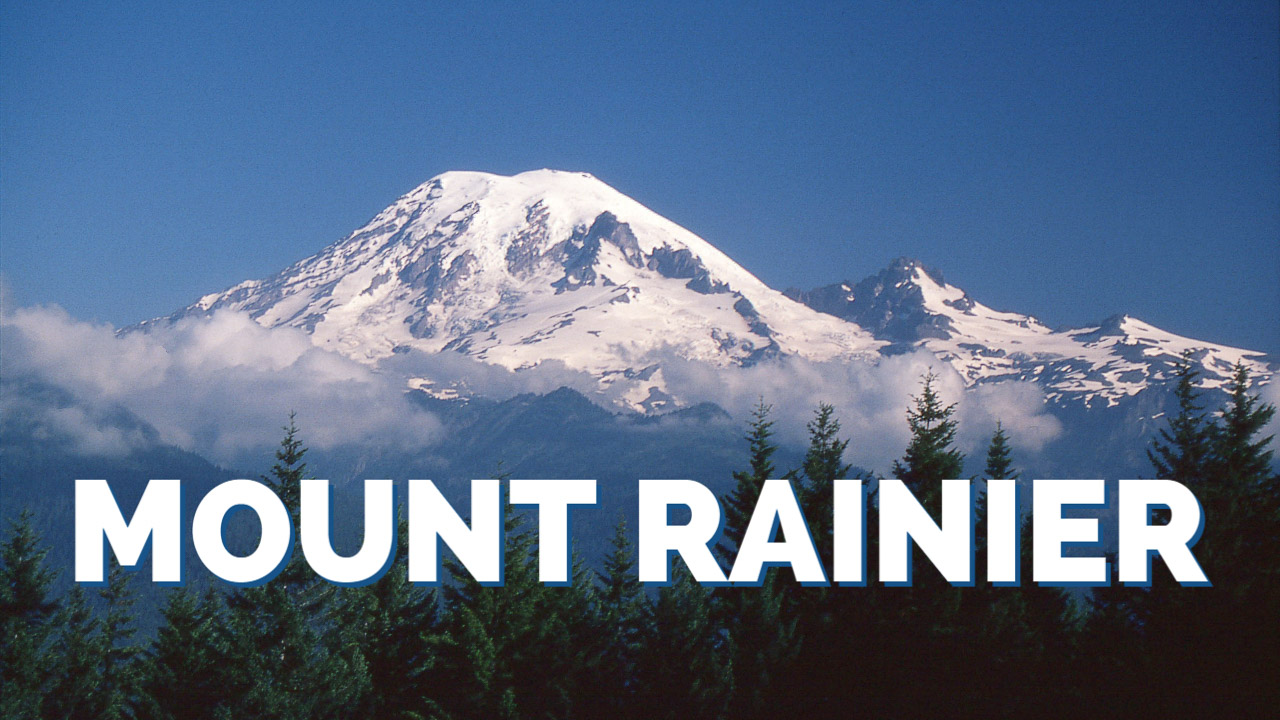 I had hiked Mount Whitney a few times, but Rainier was a completely different kind of climb. Mount Whitney and Mount Rainier are close to the same altitude. The big difference between the two is that Rainier is covered with glaciers, giant moving snowfields that are hundreds of feet thick. As they move, glaciers crack and open up, forming crevasses. Glacier travel requires climbers to travel in rope teams of two or more. You have to be roped up in case of a fall through the thin snow down a crevasse. If one climber falls, the others arrest the fall and pull the climber out. There are a lot more ways to die on Rainier than crevasse falls, but that’s the biggest difference between hiking a mountain like Whitney and climbing a glaciated mountain like Rainier.

Monday morning I got a ride to the White River Trailhead to meet up with the two other climbers — Kurt Davidson, who had been a summit instructor, and Johannes Mack. Things went pretty smoothly and we were underway by 10:00 am. The trail is beautiful, following the White River through a thick pine forest for three miles up to the first glacier, called the Inter Glacier. There was little crevasse danger on this glacier due to its shape and the excessive snowpack that year, so we didn’t feel the need to rope up.

At first glance, it didn’t look that big. We could see the ridge directly ahead of us that marked the end of the glacier and the beginning of the Emmons Glacier, but as we continued to walk, it just went on and on. After four miles of walking up steep snow, we still had not reached that ridge. We decided to stop at a rock outcropping that stuck out of the glacier. There was a small platform that would fit a few tents, so we made camp for the night.

At 14,410 feet, Mount Rainier is not the highest mountain in the US. That said, Mount Rainier has 26 major glaciers, making it the most glaciated mountain in the lower 48 states. The combination of high altitude, the variety of routes, and unpredictable northwest weather make it a far more formidable experience than the 14ers in California and Colorado. Rainier is often thought of by mountaineers as the training ground for bigger mountains like Denali and the peaks in the Himalayas.

We had originally planned to make it to Camp Schurman, but it was another three or four miles of steep climbing, and we had come a long way in just one day. We had a good dinner, enjoyed the great weather, and got some sleep. By the next morning, the wind had kicked up and blown away my dishes. I set up my chair on the rock to sit on it, but as soon as I turned around to sit on it, the wind caught it and sent it sailing some 100 feet in the air. I never saw my chair again. Hopefully some climber found it and is using it today.

Near where we camped was a river of fresh water running under the ice. Filling a water bottle was an intimidating feeling because if you slipped, the sub-glacier river would suck you in and you would never come out again. Getting water here made me pucker a little bit each time I did it.

…if you slipped, the sub-glacier river would suck you in and you would never come out again. Getting water here made me pucker a little bit each time I did it.

We got a decent start on the day and made it to a rock ridge that looked over Camp Schurman. At several hundred feet above the camp, we could see the tiny tents but no path. We improvised, scrambling down a steep snow chute, and made it to Camp Schurman by early afternoon. We thought about taking a rest day, but the weather on Mount Rainier is unpredictable. We didn’t want to risk the weather turning bad, so we planned to get to bed early and start again at 1am the next morning.

When my alarm went off, none of us were feeling great. I had a little headache, and I wondered how well I was going to do. We were in for a steep difficult climb for the next eight hours. I think Johannes was feeling apprehensive like me, but Kurt was so stoic that we couldn’t tell if he was nervous at all.

We roped up before starting out, then headed straight up the mountain in the dark. It was so steep I didn’t even want to stop, because that meant I had to plunge my ice axe into the ice, tie myself to it, and sit in a precarious place. The pitch blackness made it impossible to see anything, so it was just a slog through the dark until about 4am when the sun started to come up. The sunrise seemed to last forever that far north.

A climber ahead of us had to use the restroom, which is the worst thing that can happen on a trail like that. We were climbing very steep ice, so he called to ask us to wait and turn around while he did his business. You have to then put it in a wag bag, because you can’t just leave that stuff on the snow for everybody to see. The thought went through my head, wouldn’t it be terrible and a little hysterical if the guy lost his balance and slid down the glacier right now, leaving a brown streak behind him? It would definitely be the most embarrassing death ever.

The thought went through my head, wouldn’t it be terrible and a little hysterical if the guy lost his balance and slid down the glacier right now, leaving a brown streak behind him? It would definitely be the most embarrassing death ever.

As the sun came up, it illuminated beautiful, horrifying crevasses. As the snow melts, it’s more difficult to climb Mount Rainier because of the gaping crevasses you can’t really cross. You can only cross where there are snow bridges which, lucky for us, there were plenty. We didn’t have many detours on our way up the mountain.

We finally got to the summit at 8am. When you reach the top of Rainier and see the crater, it’s like you realize for the first time that it’s a volcano. It’s beautiful, and a little sobering. In the distance, you can see the stunning Mount Adams. We took some selfies, but it was cold and windy, as is often the case on summits. We put on extra layers, but we didn’t spend more than 15 minutes on the summit, as tired as we were.

The long slow hike down the mountain was painful. I felt like I was 80 years old. My knees ached, and as the sun came up and warmed the snow, each step became sloshy and slippery. The grade was so steep that we could see directly below us most of the way to Camp Schurman and the tiny tents. By the time we reached Camp Schurman, we were dog-tired and crashed for a nap.

The Easy Way Down

I wasn’t sure I would be able to move for the rest of the day. Luckily, after two hours of sleep, we all felt much better. By that point it was hot, and there’s no point in sitting around, baking on a glacier. We continued down the mountain and saw a glissade trail at a ridge that separated the Emmons Glacier and Inter Glacier.

I doubt a real mountaineer would say this, but it was the most fun part of the whole trip. We slid on our butts the entire length of the Inter Glacier, probably over 3,000 feet and several miles long.

Glissading, in case you don’t know, is a fancy name for sitting on your butt and sliding down the ice. I doubt a real mountaineer would say this, but it was the most fun part of the whole trip. We slid on our butts the entire length of the Inter Glacier, probably over 3,000 feet and several miles long. It was awesome! We got to the bottom of the Inter Glacier in about 20 minutes. It had taken us several hours to cover that same distance the day before.

Glissading was the perfect end to a dog-tired kind of day. Over the next couple days, Johannes and I did some sightseeing, which gave me some time to reflect on all the suffering we’d endured climbing Mount Rainier. There’s not much beauty to climbing a glacier in the dark, until the sun comes up. I wondered if I would ever want to do it again, and about 48 hours later, I thought to myself, “Boy, I can’t wait to do that again.” I’m going to have to plan the next trip to a bigger mountain with bigger glaciers, and see how that goes.