So many of us fall into sedentary lifestyles and die sooner than we should from lifestyle diseases. Jim's message and lifestyle example have never been more timely.

Bryan Feller • November 3, 2018 • 760
Share 0
Bryan Feller 2018-11-03
I‘ve had the privilege of getting to know Jim West in my role at NCF. Jim is the Founder and face of the Barnabas Group and I could write volumes about what he has done in this role. That said, Jim is also one of the fittest guys I know. In his 70s, Jim shows no signs of slowing down. In fact, he continues to live a more active lifestyle than most 20-year-olds, competing in martial arts and hiking long distances. This is why I wanted to interview him and find out what makes him tick.

So many of us fall into sedentary lifestyles and die sooner than we should from lifestyle diseases. Jim’s message and lifestyle example have never been more timely.

Jim began martial arts as a young boy and has carried the discipline with him through his entire life. However, martial arts was only a catalyst for the many recreational challenges Jim set for himself. He remained an avid martial artist as well as wrestled in high school. His awareness of being physically fit remained with him through his graduating years and he went on to focus on physical activities in his later years.

At the age of twelve, Judo became a huge part of Jim’s life. He competed for many years, and he really felt that this type of wrestling was going to be his main sport and a focus of his life. He earned his bachelor’s and master’s degree in Physical Education and went on to teach at a junior high school for ten years, concurrently teaching thirteen years at a local college.

During his college teaching, he also coached wrestling and his team finished in the top three in the California State Championships every year. He also coached soccer and won the state championship three times with his team.

When he reached 30, he claims he literally had to “divorce” himself from the idea of wrestling, because he really felt that something just wasn’t right. He stopped going to matches and following the sport, and he found it difficult to follow along as he watched people he competed against for years move up in the ranks. He ended up staying away from the sport for five years before coming to Christ.

When he reached 30, he claims he literally had to “divorce” himself from the idea of wrestling, because he really felt that something just wasn’t right.

Getting Back into the Game

Another eight years passed before Jim decided, at the age of 43, he wanted to enter a national championship in Judo, and he really needed to see how he would do in the competition. He gave himself three years to get back in shape, and after only seven months of rigorous training with a friend, he was exactly where he needed to be. Jim went on to become victorious at the competition and won! It was such an amazing feat after being out of the sport for about thirteen years; to come back and gain such a victory was astonishing.

It was such an amazing feat after being out of the sport for about thirteen years; to come back and gain such a victory was astonishing.

Even though Jim won that competition, heartbreak ensued. During the competition, Jim faced a terrible knee injury. And as he sat on the waiting table for surgery, he had to reflect on the wisdom of earning that $6 trophy, only to gain a $2,000 operation.

It was hard for Jim to face the reality that his desire to succeed in Judo was really about glorifying himself, and not what God wanted for him. As a young Christian, the gentle correction God placed on Jim’s heart was difficult to navigate, but he removed himself from Judo competitions for the better part of twenty years.

During the following years, Jim went on to train actively for rigorous hiking and walking excursions, and he competed in marathons whenever he could. Even though he was pulled away from the sport that he knew all his life, he knew that not being active wasn’t a choice. He had the physical fitness bug and fed it every chance he got.

Jim was in his early 60’s when he decided to resurrect the idea of getting back into Judo. After long prayer, Jim felt God released him from his ban on Judo, and he began to train for a large competition that he wanted to enter. God stirred a desire in Jim’s heart to take advantage of the time he spent in Judo to begin to share God’s Word with those around him in the sport.

Jim was in his early 60’s when he decided to resurrect the idea of getting back into Judo.

It wasn’t until sometime later that he and his wife, Suzy, were speaking with their son about getting direction in his life when something unexpected happened.

“He (Jim’s son) walked into our office one day and said that he would really like to try martial arts. I said what would you like to try? He said Jiu-jitsu. Brazilian Jiu-jitsu. My wife’s sitting there, my wife who’s not an athlete, not competitive, not physically strong; she’s tiny. She turns around and says, ‘I’d like to try that too.’ All I could think was that these guys were gonna get killed. We started that journey and started doing Jiu-jitsu at the same time and Suzy, my wife, has gone on to become the first woman in Orange County to get a black belt from Gracie Barra.”

We started that journey and started doing Jiu-jitsu at the same time and Suzy, my wife, has gone on to become the first woman in Orange County to get a black belt from Gracie Barra.

All said, Jim has competed in over 2,500 matches in wrestling, Judo, Sambo and Jiu-jitsu with a winning ratio of over 93%  – so far. He has even co-authored The Judo Textbook with Hayward Nishioka. And while martial arts had been a significant part of Jim’s life, during his times of absence, he kept active in other activities such as running marathons (including a sub-3-hour marathon!), walking, and hiking adventures. I was so impressed to learn that Jim and Suzy have probably hiked close to 4000 miles. His adventures have taken him to places like Patagonia and Nepal where they hiked the staggering 17,500 feet up to the Mt. Everest base camp.

All said, Jim has competed in over 2,500 matches in wrestling, Judo, Sambo and Jiu-jitsu with a winning ratio of over 93% . He has even co-authored The Judo Textbook with Hayward Nishioka. 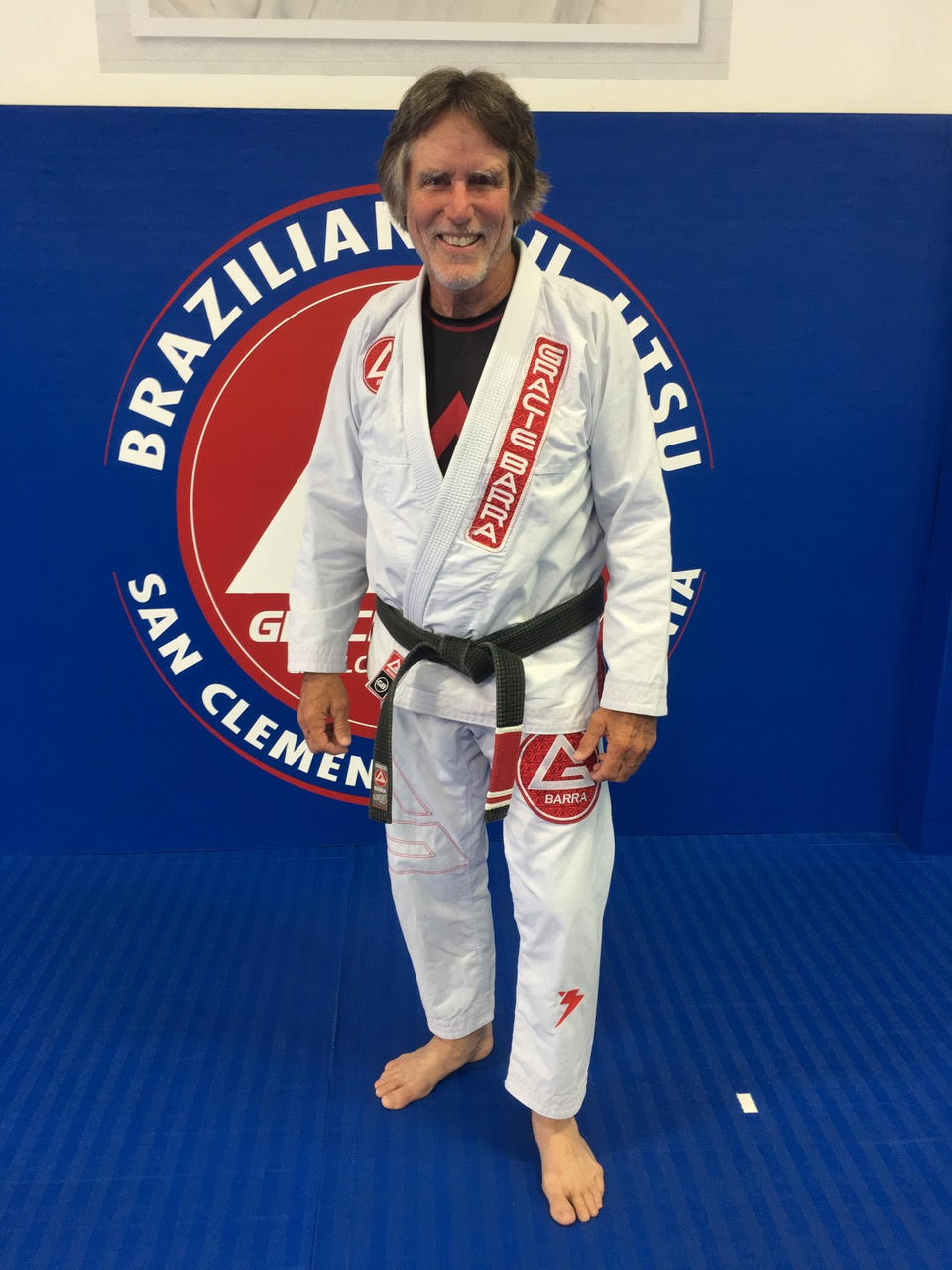 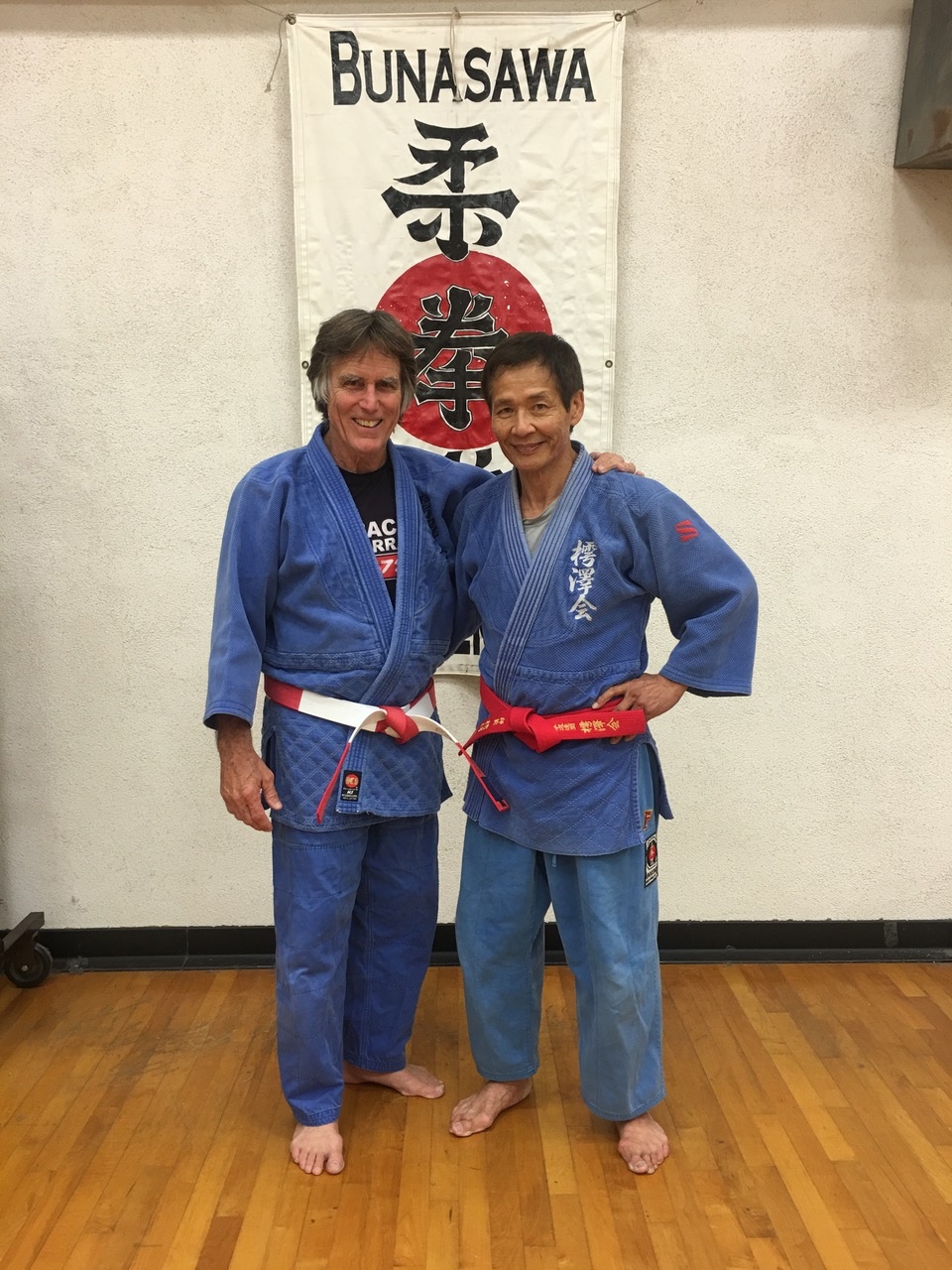 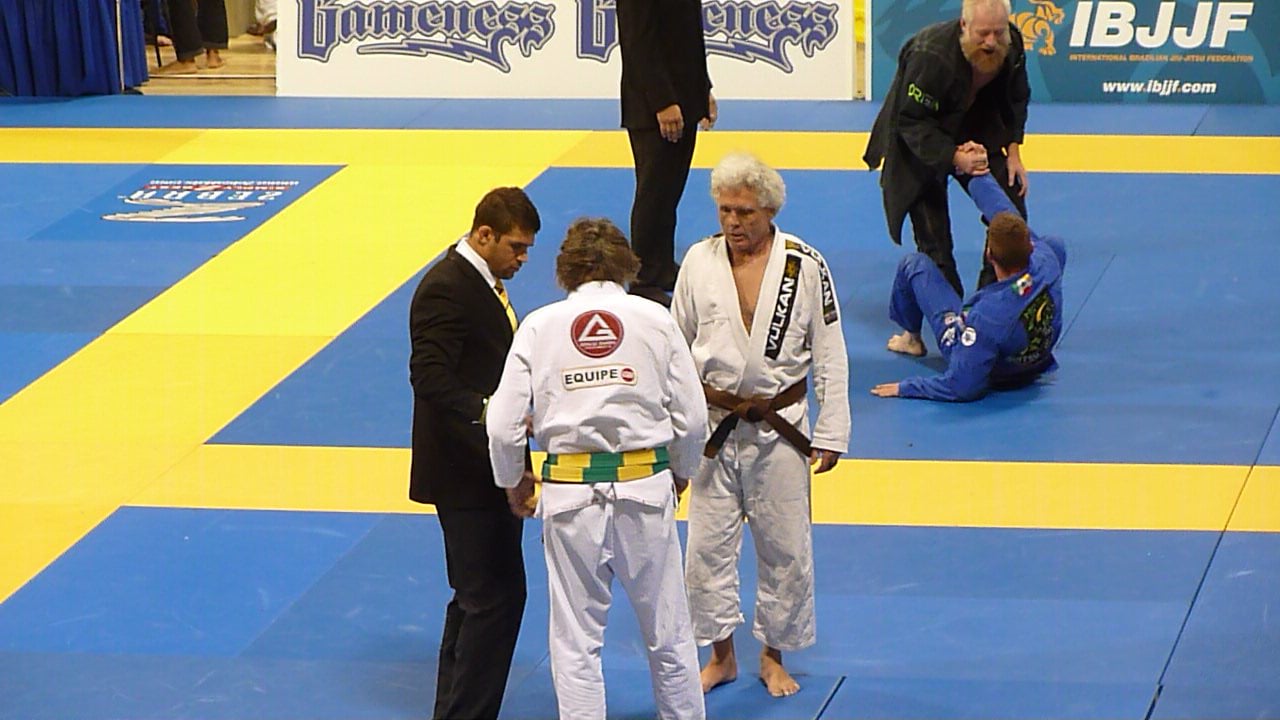 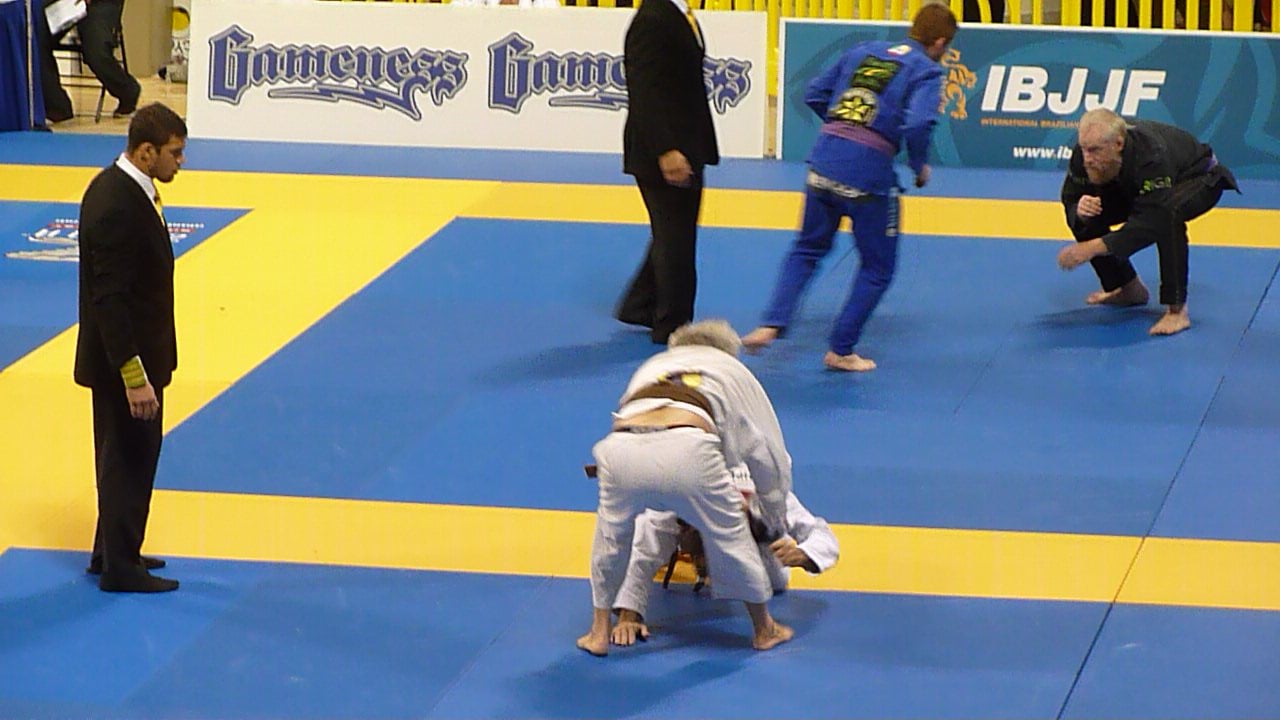 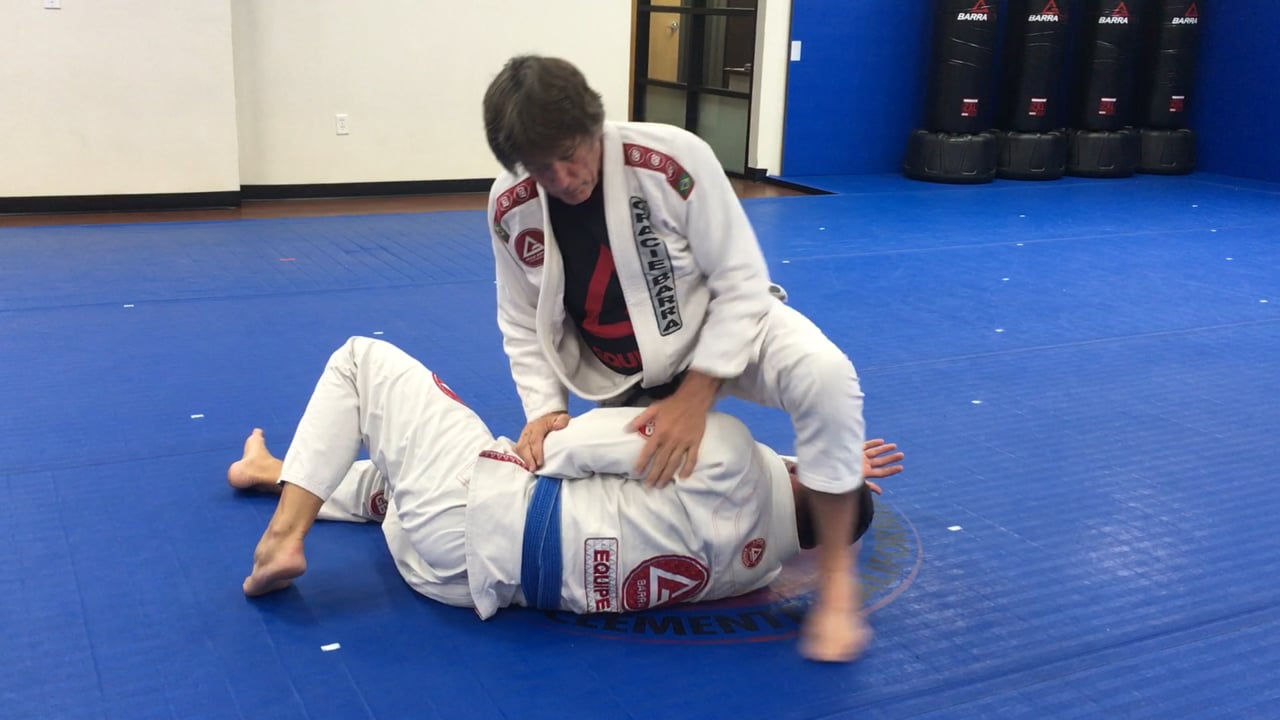 “The Two Things You Need to Do”

According to West, there are two critical things we all need to do if we want to age well: Weight training and stretching.

“Weight resistance is critical because it strengthens the bones, and typically as we get older, our bones get brittle.” Taking a fall and breaking a bone can become the start of a cascade of events that eventually can kill us.

“The other thing I think is very, very important that affects the quality of our lives is stretching. It’s hard, but if you’re actively stretching from the time you’re 30 until late into life, for 20 minutes a day, it’s gonna pay dividends. That’s probably the one thing I have not done until recent years and I feel like a piece of beef jerky when I’m out there. I have zero flexibility. I have the flexibility of a rock.”

Jim’s emphatic point of view is this: “You need to exercise! It has to be a vital part of your life. If it’s not a part of your schedule, that no one can touch, no one can interrupt, and you make it that important, then it’s gonna get pushed out of the way for everything else. You’ve gotta make time every day for some type of exercise that suits you, that makes you happy, that gets your mind off whatever you’re doing.”

Healthy Eating and the “How Not to Die” Philosophy 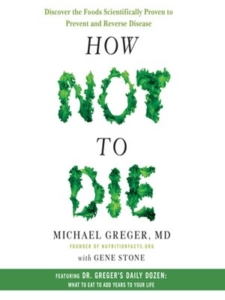 Jim confesses, “I used to be able to exercise and it didn’t matter what I ate and I could lose weight and be fine. As I got older that just didn’t work anymore. You have to watch what you eat. Eating and nutrition become incredibly important as we get old, because it’s important to our health. We can see that we look in shape, but we can’t necessarily see what’s going on inside of our bodies.”

Nowadays, Jim is moving his diet to more plant-based foods, following the evidence-based philosophy of Michael Greger, MD. In Greger’s ground-breaking book, How Not to Die, he simplifies what we all need to do if we want to avoid the lifestyle diseases that are ubiquitous in western societies: Eat more plants; eat less meat and processed foods.

Jim West and I are both fans of this approach.

“As we get older, priorities change. But one thing that needs to continue to be a priority is taking care of ourselves. Part of that is taking vacations and doing what gives you a sense of relaxation and fulfillment, whether it be on the beach, taking a cruise, or hiking a mountain. We need to be aware that we have a reset button, and sometimes we just need to withdraw from our daily routines and hit that reset. The other part we need to pay attention to is working out and staying healthy by eating better. Our bodies change as we grow older, and we need to change our way of staying fit. It isn’t just about exercise, and it isn’t just about eating healthy. It’s about finding a balanced combination of both to meet and exceed our daily needs.”

In this competitive, fast-paced world, we need to carve that time out and give our minds a rest. Give our bodies a rest from the pressures and expectations we set on ourselves. No one ever lay on their deathbed and said, “I wish I had just one more week to get that final project done.” Make that bucket list, stay fit, and make it happen!

What We Can Learn from Studying Older Marathoners