The Surprising Link Between Wilderness, Awe, and Generosity

Exploring the Science of Awe, Generosity, and the "Small Self"

Bryan Feller • May 7, 2019 • 1.9k
Share 0
Bryan Feller 2019-05-07
We started out at midnight. We hiked for hours through the dark moonless night, only able to see the feet of the person 10 steps ahead of us, occasionally looking up at the thick glowing cloud of the Milky Way above us. We reached the top of the section of trail known as “The 99 Switchbacks” (and yes, there are literally 99 of them) as first light began to give way to the sunrise. When we finally reached the Trailcrest, three miles from the summit of Mount Whitney, we were at just over 13,000 feet.

From the best seat in the house, I felt as though I had watched God Himself enter His grand cathedral. As He entered, the house lights slowly came up for dramatic effect. I was speechless.

I wrote in my journal describing that moment, “I am watching the sunrise and it is so beautiful. I’m almost paralyzed by it. I’ve stopped dead in my tracks. We all have. There are twenty hikers I can see a few hundred feet below me. We are all staring at this marvelous spectacle. First in deep purple and blue, then in faint rose, then in brilliant orange. From the best seat in the house, I felt as though I had watched God Himself enter His grand cathedral. As He entered, the house lights slowly came up for dramatic effect. I was speechless. The agnostic next to me had a frozen tear on his cheek and he used the word ‘heaven’ to describe what he was seeing.”

It was a long day. We didn’t get back to the trailhead until 4:00pm that afternoon. I remember checking out of my hotel room and just spontaneously leaving a $200 tip for the maid. I had never done that before. I had experienced some kind of transcendence that I could not describe and I couldn’t help but overflow in generosity – to a person I had not even met.

I sensed that I had rediscovered some long-dormant secret, but I wasn’t clear exactly what it was. There was some link between what I had experienced on the mountain and my generosity, but what was it? How or why did it work? It wasn’t until later on that I realized what was really going on that day.

I remember checking out of my hotel room and just spontaneously leaving a $200 tip for the maid.

I had experienced a state of awe that day in a depth I had not previously experienced. Technically speaking, awe is a kind of transcendent euphoria we experience when we see something that is beautiful and vast. Sometimes fear is also part of the experience.

In a way, awe is an altered state of consciousness, akin to a state of flow popularized by ‎Dr. Mihaly Csikszentmihalyi in his numerous books on the subject. Standing on a mountain peak, watching a tornado, or being in the presence of a lion (hopefully behind a fence) can create an experience of beauty (this is incredibly majestic), vastness (this is so much bigger than I can comprehend) – and sometimes fear (this can also kill me). Goosebumps or tears may accompany the experience, but not always.

We can also experience awe by listening to a complex piece of music, seeing an artistic masterpiece, or hearing a story about the person who presses on, against all odds, or possesses some extraordinary nobility. But wilderness often creates the most powerful awe experiences.

Awe causes us to rethink how we see the world and causes us to contemplate our place in it. Only recently, scientists have been studying the experience of awe, and we can learn some fascinating lessons from it.

One of the things that happens to us when we experience awe is what researchers have called “The Small Self.” When people had an awe experience and were asked to select a picture that represented them, they tended to select pictures that had a small person in relationship to other objects in the picture. In other words, people who experienced awe would say the “Small Self” picture on the right describes them, while those who did not, typically chose the “Big Self” picture on the left. In other experiments, participants who had awe experiences, when given a selection of circles of differing sizes, would tend to choose the smallest circles to represent themselves, while those who did not experience awe would choose big circles. 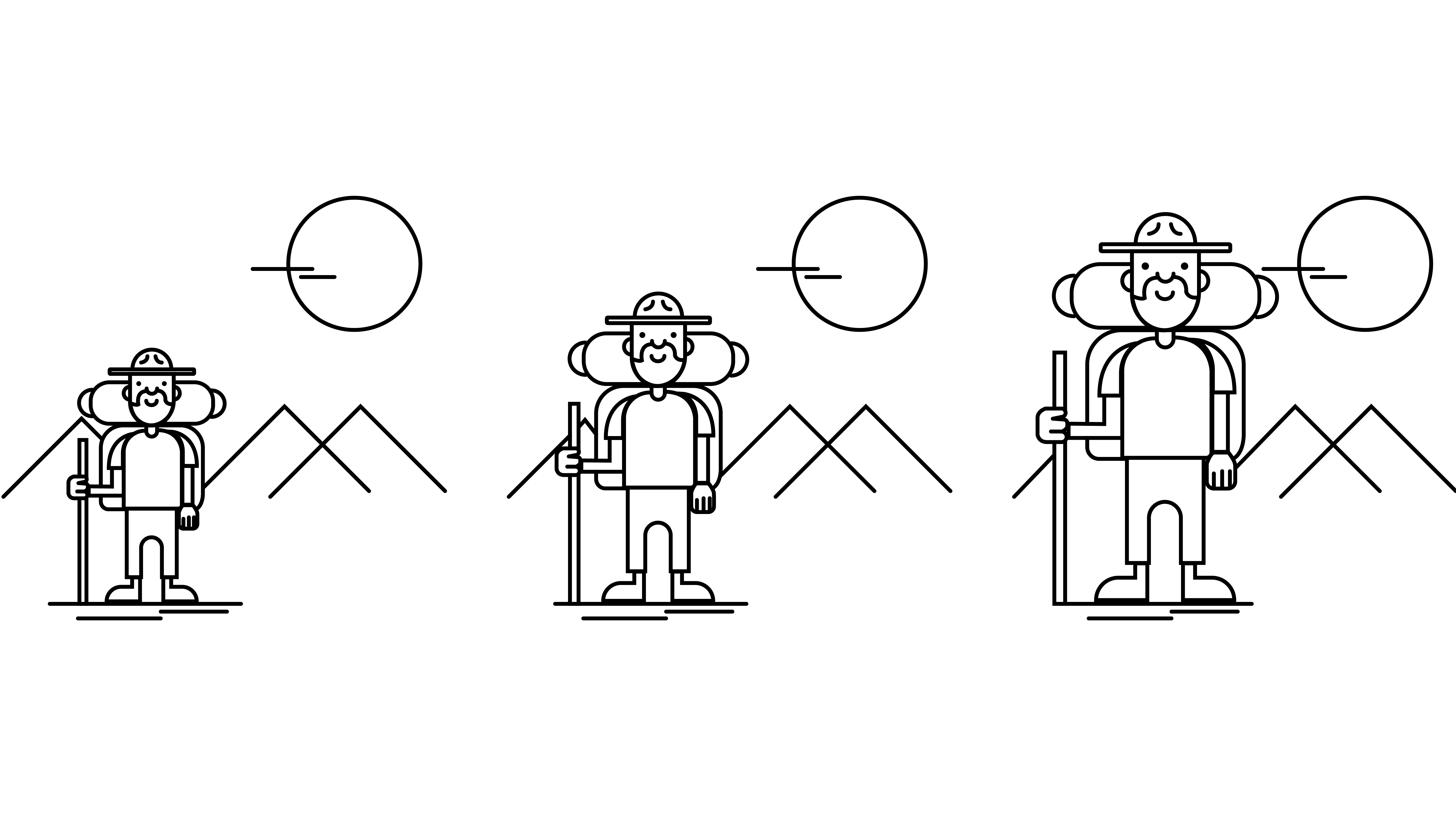 In other research, when people who had awe experiences were given bubbles of different sizes to represent themselves, they tended to choose small ones, where people who did not tended to choose larger bubbles to represent themselves. Over the course of many of these types of experiments, researchers have come to understand that awe experiences make us feel small psychologically.

And it’s this phenomenon of “being small” that creates the conditions for all kinds of other positive emotions and behaviors. Shame, like awe, also causes people to feel small, but there is a key difference. People who experience awe feel small AND connected to others, whereas those who experience shame feel alienated from others.

When asked questions related to this, those who experienced awe answered that they feel more connected with everyone in the human race than they would simply looking at a building or going about their business. So there’s something powerful that this emotion does to us. It makes us feel small, and yet at the same time makes us feel more connected.

The More Generous Self

These experiments mirror my personal experience on Mount Whitney. In other studies, awe experiences led people to cooperate more, have more joy, be more humble, and be less narcissistic, entitled, and materialistic. Awe is also strongly linked to having a greater sense of purpose.

Modern science is only now beginning to understand what humans have known for millennia. From the earliest signs of civilization, men of old went to the wilderness on a quest to hear the voice of the Almighty and experience the transcendence and transformation that would follow. Science is only confirming that the wilderness itself puts us into a state of receptivity and allows us to “tune in” to a state of being that transforms us.

Let’s consider that none of the ancients had a cell phone or internet access or social media accounts. They all lived in rural settings already, and yet they still knew they needed to leave their comfort zone and go to the wild places to meet God and self.

For moderns like ourselves, we are bombarded by so much activity and stimuli that we are ALL finding ourselves somewhere on the attention deficit scale. We are quickly losing touch with ourselves, the Almighty, and one another. How much more do we need to make space for wildernesses?

The prophet Jeremiah admonishes us: “The Lord says, ‘Stand by the roads, and look, and ask for the ancient paths, where the good way is; and walk in it, and find rest for your souls.’ But they said, ‘We will not walk in it’ (Jeremiah 6:16).

Like sugar being causal to our global obesity epidemic, technology and urbanization are causal to the decline of our relationships and our mental health.

“Stand by the roads, and look, and ask for the ancient paths, where the good way is; and walk in it, and find rest for your souls.”

David Books, in his book The Second Mountain writes, “In the wilderness, life is stripped of distractions. It is quiet. The topography demands discipline, simplicity, and fierce attention. Solitude in the wilderness makes irrelevant all of the people pleasing habits that have become interwoven into your personality.”

Belden Lane, in his book Backpacking with the Saints takes this further when he says, “What happens when a ‘gifted child’ finds himself in the wilderness where he’s stripped away of any way of proving his worth?… What does he do when there’s nothing he can do, when there is no audience to applaud his performance…? His world falls to pieces. The soul hungry for approval starves in a desert like that. It reduces the compulsive achiever to something little, utterly ordinary. Only then is he able to be loved.”

Anecdotally, when I think about the connection between wilderness, awe, and generosity, I think of the story of Rene Lockey. Rene is a modern woman, who followed the ancient path and found transcendence in the process. As a successful obstetrician, Dr. Lockey still found herself unfulfilled. She had achieved life goals she had set for herself early in life and had an inner longing for something more.

She is a trail runner and uses her time outdoors to pray and hear God’s voice. Lockey says, “So often when I get home from work, I can’t wait to get my shoes on and get out on the trail. When I’m running I hear really radical things from God, and that’s where I go to meet Him. That’s the time when He puts thoughts in my head that are beyond myself.”

Rene lived on 1/4 of what she earned and gave the other 3/4 to charities.

One day on a run, Rene heard God say, “I want you to work like a doctor and live like a nurse.” In a radical departure from cultural norms, Rene took this to heart and completely recalibrated her lifestyle. From that point forward, Rene lived on 1/4 of what she earned and gave the other 3/4 to charities. Her life has never been the same since.

What I love about Rene’s story is that she deliberately put herself in a wilderness setting where she could quiet her mind and hear the Almighty. It changed her. And it can change all of us.

When I’m on the job, speaking at events, managing emails and phone calls, and driving from one client meeting to another, I feel powerful and secure. In my urban world of false confidence, I experience my “big self.” I am drawn to consume more and live for myself rather than give myself away to others.

In the wilderness I am small, and it’s this “smallness” that is the perfect counterbalance to my “big self.” Like Rene Lockey, it’s in the wild places that I truly hear the voice of the Almighty reminding me of how small I am and yet how my life matters to Him. In these moments I see my purpose, I sense His love for me, and I realize how connected I am to others. How can gratitude and generosity not be my response to all this?

What is your response to this? Don’t be afraid to get out there in the wild places and see for yourself.

What I Learned About Love, Death, and Fatherhood on Sawtooth Peak

When Hungry Orphans Pray for Food, They Get Steak!