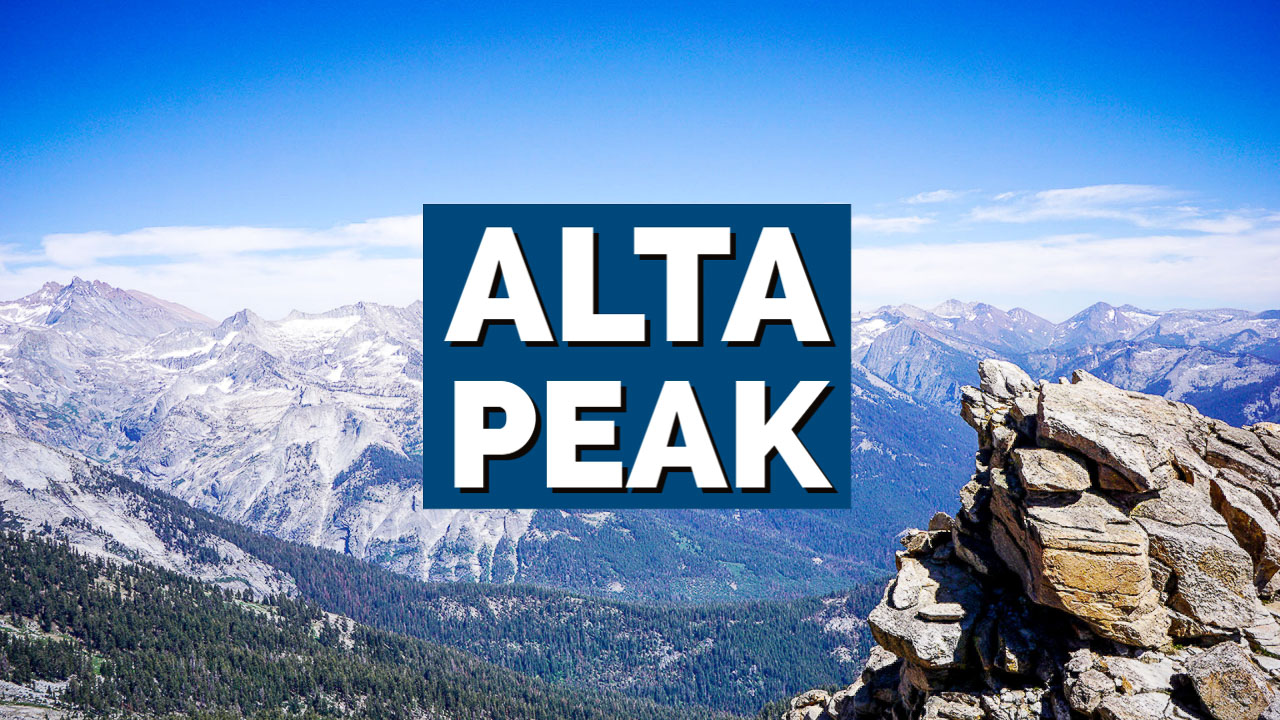 Alta Peak can be done as a day hike or overnight. I planned an overnight because of the time it takes to get to the trailhead and the length of the hike. The trail begins at Wolverton and climbs steadily through forests, meadows, and alpine vistas.

I’m doing a series of fitness hikes as I prepare for my John Muir Trail hike at the end of August. I’ve had Alta Peak on my list for a while, so I was pretty excited to finally get it on the calendar. My plan was to drive up early Friday morning, hike in 5 miles, and set up camp. I’d summit that day, then come home on Saturday.

I got up at 4:00 am and made it to the trailhead by late morning after picking up my permit from the Lodgepole Visitor Center. After about a mile I ran into a hiker hurrying toward me – white-faced. I saw behind him a momma bear and three tiny cubs. This hiker was as dumb as a brick. Doesn’t anyone watch the Discovery Channel? Momma Bears are the one animal you don’t want to mess with. And yet, he walked right up to her and her cubs and she growled a stout warning at him.

He was really lucky to have walked away. I encouraged him, and the other hikers who had arrived, to stand around for 15 minutes until she left the area.

Doesn’t anyone watch Discovery Channel? Momma Bears are the one animal you don’t want to mess with. And yet, he walked right up to her…

The trail was pretty easy for the first 5 miles, gaining altitude gradually. I found a nice campsite at Mehrten Meadow and set camp, but the mosquitos were pretty bad during mid-day and I wondered how bad they would be later. I left most of my gear at camp and started back on the trail with a light summit pack.

The last two miles to the summit were pretty tough. It was steep and really hot, not to mention the altitude. That said, the views were beautiful. Across the valley, the jagged granite peaks of the Sierra crest dominated the horizon. Looking west from the summit was a huge snowfield and four subalpine lakes. I grabbed a snack and took a bunch of photos before heading down to camp.

When I got back to my tent, the mosquitoes were unbearable. And I had hours of daylight to endure them. “Nope, I’m not doing this. I’m outta here!” I figured I had time to get off the trail before nightfall, so I quickly broke camp and headed down the trail.

I got back to the trailhead by 7:00 pm and started the long drive home. Despite the number of snacks and caffeine I ingested, I could barely stay awake by the time I got close to home. I made it home just before midnight.

Despite the amount of snacks and caffeine I ingested, I could barely stay awake by the time I got close to home. I made it home just before midnight.

All-in-all, I drove close to 500 miles and hiked 14 miles in one day. Was it worth the drive and the exhaustion just to see the wilderness? Absolutely, without a doubt.